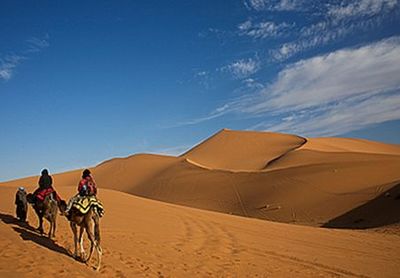 Compare prices and save money on your car rental in Algiers

For a satisfying discovery of Algiers and its enchanting surroundings there is nothing like hiring a car and travelling in enduring freedom. On GoCarRental.com we can guide you through the many offers of the many car rental agencies in Algiers by comparing them and finding the best low- cost cars. Algiers, as we know, is Algeria’s capital. Useless to say, we are here talking about a cosmopolitan city that has been vastly affected by several cultural influences. Arabian, Spanish, and French culture are only the most prominent. We suggest commencing your visit by the Kasbah quarter, quite the must­see even if you are not much informed about Algerian culture. The Kasbah is a labyrinth of houses, palaces, mosques, hammams, and traditional shops. In the core of this UNESCO World Heritage Site you can find the outstanding Museum of Prehistory and Ethnography of Algiers, also known as Bardo National Museum. The Bardo Museum has specialized in prehistoric objects and ethnographic evidence of all those peoples that lived in the Sahara Desert. This captivating museum was created in 1930 and is today a worldwide­known excellence. Moveover, the Bardo Museum is hosted by a beautiful Arabian­style palace with a surrounding lavish garden which bends over the Bay of Algiers. In this unparalleled setting one can see Algiers’ inclination to blend nature and culture. Now, take some steps back and enjoy a walk in the Che Guevara Boulevard (formerly known as the Boulevard of the Republic) which houses some of the most important public institutions of Algiers. In walking along this promenade garnished by wonderful arcades, you will view the City Hall, the Courthouse, the Governor Palace, and finally the town casino. Then, our piece of advice is to head straight away to the National Museum of Fine Arts, which is Africa and Middle East’s largest museum. With an area of more than 4000 square meters and some deposited 8,000 artworks, it boasts a world­level array of rare and unique art pieces. You can finally stroll right in front of the National Museum of Fine Arts. The Hamma Gardens, with about 1200 species of plants spread over 34 hectares, are one of the largest botanical gardens in the world. Algiers visitors usually highly appreciate its calm and relaxation. If you move away from Algiers, you will easily reach Bologhine. Its famous Notre Dame d'Afrique Basilica is adorned by artistically valuable mosaics. A cable­car transportation service has been installed to facilitate its access.