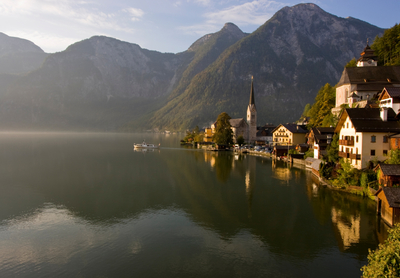 Compare & Save on car rental in Austria

Austria is a federal republic of 19 states in the heart of central Europe, with borders that touch 8 other countries. It was originally part of the Holy Roman Empire, and the origins of the modern state begin with the the rule of the Habsburgs initially as Dukes of Austria, in 1276. Various branches of the Habsburg dynasty continued in power until 1918. Austria grew in power and influence through the centuries, and the House of Habsburg united itself with some of the major royal families in Europe, extending its power and influence. In response to Napoleon declaring himself Emperor of France, Austria was also declared an Empire in 1804, and towards the end of the century, in the face of another threat – the growing power of Prussia – the Austro-Hungarian Empire was formed. The First World War was initiated by the assassination of the Archduke Ferdinand of Austria, and the Habsburg dynasty finally fell at the end of the war in 1918. A year later Austria declared itself a Republic, and with the 7-year interval of the “Anschluss”, the annexation of the country by Nazi Germany, the country has continued to be a democratic republic, now a member of the European Union. Austria is now a popular tourist destination, for its ski resorts in the winter, mountain scenery and lakes in the summer, and its many incomparable historic cities.

Things to Do in Austria

With the variety of attractions that the country offers Austria provides unrivalled opportunities for touring vacations. Arranging car rental through GoCarRental.com and collecting your vehicle from the country’s major international Vienna airport enables you to explore all that the capital city has to offer before heading off. St Stephens Cathedral is a must-see, both for its soaring towers and its breathtaking interior, and the UNESCO Wiorld Heritage Site of the Schonbrunn Imperial Palace on the outskirts of the city is another major attraction. Other Austrian cities that offer a feast of delights are Linz, on the Danube, and Salzburg, the birthplace of Mozart.

In Linz, visit the medieval heart of the town and the gigantic Schlossmuseum, with its unrivalled collection of weaponry and 1,000 years’ worth of cultural artefacts. Salzburg entrances with its Baroque architecture and mountain setting – be prepared for Mozart to appear on everything, from tea cakes to t-shirts! The 11th century Hohensalzburg Fortress that looms over the town can be visited – don’t miss the medieval princes’ apartments. A very different palace is the 18th century Schloss Leopoldskron which features in “The Sound of Music”, and was the birthplace of the Salzburg Festival. The Austrian Tyrol provide wonderful hiking on well-marked trails in the summer and some of the best ski-ing in the winter. The poplar ski resorts of Innsbruck and St Anton are in the Austrian Alps, close to the border with Liechenstein and Switzerland.

Driving in Austria is a delight – the usual European traffic rules apply, and the roads are well-maintained and clearly signed. Some regulations that all visitors should be aware of – you must carry a reflective vest in your car in case of accident, and in winter it’s obligatory to have winter tyres or snow chains. Your car must have a toll sticker, and your car rental company will explain how this works when you collect your vehicle. For short-term parking in most Austrian towns you can buy a ticket from a local shop and fill in the time of your arrival. The speed limit on motorways is 130 kph, and on highways 100 kph, and limits are strictly enforced. Major routes from Vienna are the A1 and A10 to Salzburg, the A2 south to Graz, and the A5 into the Czech Republic.