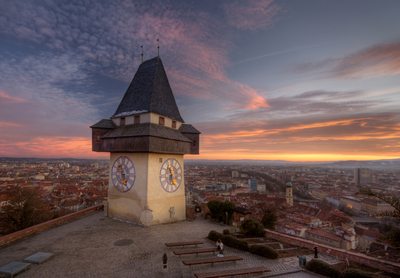 Compare & Save on car rental in Graz

This picturebook Austrian city is the second-largest in the country, with a population of around 300,000. Some 50,000 of those are students, and Graz is home to six universities – but this is no typical student town. Renaissance courtyards and provincial baroque palaces sit alongside innovative modern designs in this laid back city that can be traced back to Roman times. A turbulent history that includes regular assaults by the Ottoman Turks (leaving behind some stunning architecture as a result), as well as Soviet occupation following WWII, Graz was European Cultural Capital in 2003 and still boasts a wide array of arts venues and sights to explore. And that student population keeps the nightlife buzzing and the art and music scenes fresh and lively too.

Things to Do in Graz

If all you know about Graz is that it’s the birthplace of Arnold Schwarzenegger then you’ve got plenty to learn! Make your first stop a trip of Schlossberg, the mountain that towers over the city. Here you can explore the famous clock tower that has become an emblem of Graz, as well as the castle, and you’ll find some spectacular views. Take a stroll around the city’s Old Town, which is a designated UNESCO World Heritage Site, and check out the newest exhibition place in town, the Kunsthaus – just next to the river, you won’t be able to miss its futuristic blue bubble shape. And while you’re by the water, make a stop at Murinsel, an artificial island built for the 2003 Cultural Capital of Europe celebrations, but the locals loved it so much they kept it – now home to an events space and cool coffee house.

Driving within the city can be confusing for newcomers thanks to Graz’s one-way system, but a good Sat Nav will see you right. There are underground parking areas throughout the city where you might find it easier to park and then explore on foot. Graz is well connected to cities throughout Austria via the A9, running north-south through Graz, the A2, just south of the city, running east-west to Vienna, although the more scenic route is via Bruck/Mur taking the S6. Getting out of Graz itself, a beautiful drive can be had to Schöckel mountain to the east as well as to the Austrian Open Air Museum a few miles north.