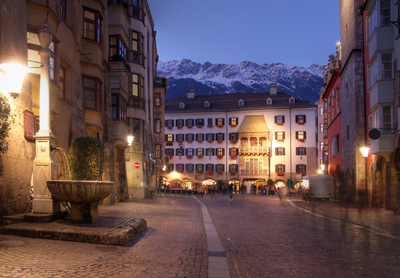 Compare & Save on car rental in Innsbruck

Innsbruck today is one of Austria’s foremost winter sports resorts, and has hosted the Winter Olympics in 1964 and 1976. The origins of the city go back to pre-Roman times, and the Romans created an important military camp on the site to guard the strategic crossing over the river Inn. The name of the city comes from the German “Brücke” (bridge) and the river – bridge over the river Inn. Innsbruck became an important town in medieval times when it was made the capital of the Tyrol, and in the 15th century the Habsburg Emperor Maximilian I made it his principal residence. The city benefited from the continuing presence of members of the Habsburg dynasty, with palaces, an opera house, and a university all being built during the 17th and 18th centuries. The city was annexed to Germany in the Anschluss of 1938, and later suffered extensive damage in Allied bomb attacks during WWII. Innsbruck’s economy benefits today from tourism, with more than a million overnight stays annually. Innsbruck Airport has seasonal flights from the UK and the nearest major international airport is Munich, 2 ½ hours’ drive away. Car rental is available from Innsbruck or Munich Airports, and booking through GoCarRental.com provides a wide choice of vehicles and great deals.

Things to Do in Innsbruck

Buying an Innsbruck-card is an economical way of seeing the sights, as it covers free entrance to all the major historic and cultural buildings. The Allstadt, or Old Town, boasts medieval houses, the “Golden Roof” museum, and a traditional Christmas market. The medieval Maria Theresiastrasse is the centre of this area. The Hofkirche, built in 1553 by the Emperor Ferdinand, has some impressive carved wooden galleries and the black marble cenotaph of Emperor Maximilian. The 18th century Baroque Cathedral has an Imperial tomb and a famous painting by Lucius Cranach the Elder. The Imperial Palace (Hofburg) is a magnificent Baroque building with some superb interiors, set in glorious scenery.

In the hills above Innsbruck is the Renaissance Ambras Castle, residence of the Archduke Ferdinand in the 16th century. No visit to Innsbruck is complete without enjoying the mountain views, and you can take the Funicular railway to Hungerburg and Seeburg for the most breathtaking views and a chance to explore the small Alpine town of Hungerburg. The Tirol Panorama Museum not only provides wonderful views over the city but also has fascinating exhibitions on the turbulent history of the area.

No visitor to the area should be without a car, as there is so much to see and enjoy, especially in the summer when driving in the mountains is easier. Innsbruck is located on the crossroads of two major motorways, the A12 which runs between Munich and Switzerland and the A13 which runs south to Trento and Verona in Italy. So Innsbruck is an ideal base from which to explore the Tyrol and further afield. If you are crossing into Italy or Germany remember to check on traffic regulations ahead of your trip – in Austria, there are rules about safety and high viz equipment that you must carry in your vehicle, and your car rental company will make sure that you have these. In the colder months it’s obligatory to drive on winter tyres or to use chains. In the centre of Innsbruck parking can be difficult to find, so the advice is to park a little way out of the old town and explore on foot.