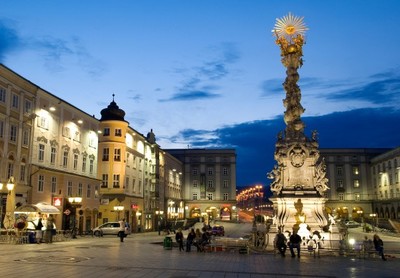 Compare & Save on car rental in Linz

A haven for music lovers, home to Bruckner and some of the most cutting edge electronic music in Europe, Linz is the capital of Upper Austria. A river town sprinkled with beautiful baroque houses, this is no stuffy old European city, but a bold and forward thinking melting pot that mixes the old and the new to perfection. Since being crowned European Capital of Culture in 2009, Austria’s third city, which sits prettily along the Danube, has become a cultural hub. There are daring public art installations, cool new museums and futuristic galleries, all living comfortably in a historic city that’s home to chic old coffeehouses, pretty buildings and a castle too.

Things to Do in Linz

If you’re a lover of all things musical, you might want to coincide booking your trip to coincide with one of Linz’s fantastic music festivals. Late September brings the Bruckner Festival, celebrating one of the city’s most famous composers, while mid-June you’ll encounter the Ars Electronica Festival, including its renowned laser show. A must-see along the Tummelplatz s the four-story Schlossmuseum - considered to be one of the best provincial museums in the world, which features stunning re-creations of 19th-century Austrian homes. An absolute must for foodies is to sample one of Austria’s tastiest delicacies, and a local creation – the Linzertorte – try Traximayr, an authentic old-style European coffeehouse for some of the best. And Linz Castle and Museum is the place to find out more about Linz’s origins, and about this beautiful structure that originally dates back to at least 799.

A stroll around the cafes of the Altstadt (Old Town)

Linz makes for a great stepping-off point for trips into the Southern Bohemian region of Czech Republic and on to Prague. There’s the nearby Salzkammergut region to explore, packed with picturesque lakes and mountains, while Salzburg is within easy reach to the west too. Linz is well connected with Vienna, Salzburg, and Munich via the A1 Autobahn/motorway; the Muehlviertel A7 Autobahn, and the south of Austria, including Graz and Klagenfurt, via the A9 Autobahn. It’s also connected to Germany via Passau.