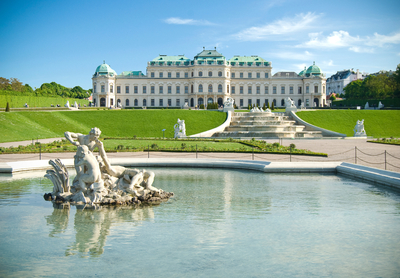 Compare & Save on car rental in Vienna

Vienna is the capital of Austria, and for many centuries it was the centre of the Austrian Empire and home to the Habsburg Emperors. The city is listed as a UNESCO World Heritage site for its many historic houses and palaces, and Baroque and Renaissance architecture. Vienna is the base of a number of international organisations, including OPEC and the United Nations. Amongst its famous sons are Sigmund Freud and Mozart, who lived in the city for a number of years. Vienna was the most important European musical centre in the 18th and 19th century and the Vienna Philharmonic is still one of the most admired orchestras in the world. The Habsburg Emperors initiated many large scale building projects, and the Ringstrasse, for which the city is famous, was built on the foundations of the city’s original defensive walls in the 19th century. The city was occupied by the Germans during WWII and the famous film “The Third Man” captures the post-war period when the city was divided between the four occupying Allied powers. Today the city’s historic centre, museums and art galleries attract large numbers of tourists annually

Things to Do in Vienna

The Hofburg Palace, the winter residence of the Habsburg Emperors in Vienna, is a magnificent building which now is not only the residence of the President of Austria, but also houses the Sisi Museum which is devoted to the Empress Elisabeth, the Imperial Treasury and the famous Spanish Riding School. The city’s Museums Quarter is a 1990s conversion of the Imperial stables, and the Museum of Modern Art, the Leopold Museum and Museum of Architecture are all housed here. No visit to Vienna is complete without exploring the historic centre, and a tour of the magnificent St Stephens Cathedral.

The Rathaus, or city hall, looks especially dramatic when lit up at night, and the famous Christmas Market is held outside its doors. Stephensplatz is a pedestrianized street which is packed with inviting coffee shops and restaurants, and has a lively nightlife. The Hundertwasserhaus is a wonderfully surreal and multi-coloured building which is a favourite of the Viennese themselves. Schonbrunn, the summer palace of the Habsburgs, is sometimes described as the Versailles of Vienna. There are a number of attractions on the outskirts of the city and car rental gives you the mobility to explore them easily. A popular area is the Vienna Woods which lie to the south west of the city, with vineyards, woodland paths and spectacular views over the city.

Locals advise leaving your car outside the Vienna’s central ring and walking or taking a bus into the centre, as the streets in the historic centre are narrow and many are one-way and can get gridlocked during rush hour. Parking in the centre is restricted during the day. Driving outside the Ringstrasse is easy if you remember some key traffic rules – pedestrians have right of way on crossings even where there is no signal present, and you are expected to stop at intersections to allow pedestrians to cross. The road system linking the different districts of the city is extensive and can be complicated, so when you book car rental through GoCarRental.com make sure that you’ve asked for satnav in the car. If you are collecting your vehicle on arrival at Vienna’s International Airport the drive in to the city is very straightforward, taking about 20 minutes on the A4. Your car rental should have a toll ticket on the windscreen, which is obligatory for all vehicles in Austria.