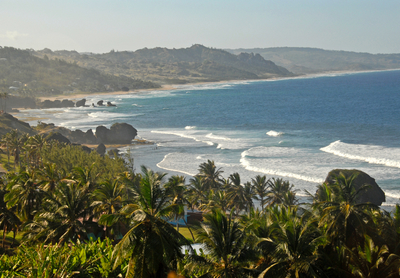 Compare & Save on car rental in Barbados

Barbados is the easternmost of the Lesser Antilles islands, and one of the most popular tourist destinations in the Caribbean. With the arrival of British settlers in 1627 the island came under British rule, uninterrupted until Barbados gained its independence in 1966. The prosperity of the island was founded on the sugar cane plantations that were developed in the 17th and 18th centuries, and tourism is now a major contributor to the national economy. The island is divided into 11 parishes all (except Christ Church) named after Saints. The capital is Bridgetown, a UNESCO World Heritage site.

Things to Do in Barbados

Renting a car will give the freedom to explore all Barbados’ numerous little beaches and coves, the old plantations and the sub-tropical vegetation of the interior. Arrange car rental through GoCarRental.com for your trip to Barbados and you can pick up your vehicle on arrival at Grant Adams International Airport. The island is famous for its white sand beaches – Paradise Beach and Freshwater Bay are two of the typical palm-fringed coral beaches on the west coast of the island. Mullins Bay is one of the most popular beaches on this stretch of the coast, with jet-skiing on offer, and beachside bars. The south coast of the island is where Atlantic Ocean meets the Caribbean, and the mix of sheltered lagoons and livelier surf makes the beaches ideal for every kind of watersport, from snorkelling to windsurfing. Dive enthusiasts will love the opportunities to explore wrecks or swim amongst the amazing tropical fish in the coral reefs. Popular dive sites are Maycocks Bay, Dottins, and Shark Bank, home to turtles rather than sharks!

Bridgetown and the Garrison

To take a break from sand and surf, the capital Bridgetown is well worth exploring for its maritime history and attractive buildings. The 17th century Parliament is the third oldest in the world, and Bridgetown’s Nelson statue and Trafalgar Square is actually older than London’s! Whilst in Bridgetown visit the old 17th century military Garrison – a tour includes George Washington’s house. To sample delicious fish and chips, visit the fishing community of Oistins on a Friday or Saturday night when there’s a massive “fish fry-up”. St Nicholas Abbey in the parish of St Peter is one of the very few Jacobean mansions in the Caribbean, and has a fascinating and romantic history. The central uplands of the island are worth exploring for their lush beauty and for the underground limestone caves – the best known is Harrisons Cave, where you can take a trip on a tram past underground lakes and waterfalls and view the cathedral-like limestone structures.

Driving in Barbados is blissfully easy, and when planning car rental consider booking a 4x4, to give you the freedom to go off-road and explore some of the unsurfaced tracks in the interior of the island. Barbadians drive on the left, and the traffic regime is relaxed, with roundabouts often serving in the place of traffic lights to keep traffic moving – the only time it gets busy in the larger towns is during morning and afternoon rush hours. Rental vehicles have an “H” on their number plates, to distinguish visitors from the locals. Remember that a hoot on the horn is a greeting not ticking-off! Main roads are named rather than numbered, and the main west coast highway running from Bridgetown to Speightstown is the Ronald Mapp Highway. Grantley Adams International airport is in the south-east of Barbados, a short drive from the capital on the west coast.