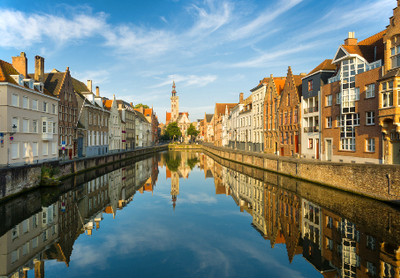 Compare & Save on car rental in Belgium

The name Belgium comes from the Roman name for the province of Gallia Belgica, and from the Middle Ages the area was divided up into a number of fiefdoms owning their allegiance either to the French King or to the Holy Roman Emperor. The eighty years war in the 17th and 18th centuries divided the region into the United Provinces and the Southern Netherlands. Napoleon annexed the two to France during his brief reign as Emperor, and after his defeat they were reunited under the title of the United Kingdom of the Netherlands. In 1830 the Belgian Revolution led to the separation of the Netherlands from what is today the modern country of Belgium, which still has two major language areas within it – the Dutch-speaking Flemish, and the French-speaking Walloons, as well as a German-speaking minority. The country was invaded by the Germans in both the First and Second World War, and in 1951 became one of the founding members of the Common Market. Today Belgium is a prosperous country benefitting from its location in the heart of Europe, with a constitutional monarchy and a capital city, Brussels, which is home to the European Commission and a number of important international organisations.

Things to Do in Belgium

The country is famed for its many beautiful and historic cities, and the best way to appreciate all that Belgium has to offer is to book car rental online through GoCarRental.com, giving you the freedom to tour the country. Ghent is one of Europe’s most beautiful medieval cities, with many old Flemish houses lining the canal in the centre of the city. St Bavo’s Cathedral and the Castle of the Counts are two glorious Gothic constructions. The old university town of Leuven sometimes gets forgotten in favour of the more famous Bruges, but it has a number of treasures, including the Gothic Town Hall. Bruges, of course, is not to be missed – with its canals, museums, historic buildings and city gates, it’s often known as the “Venice of the North”.

Major attractions are the old City Gate, the Romanesque Basilica of the Holy Blood, and the many bridges over the peaceful canals. The 15th century Old Toll House in the centre of the city is a must-see. Antwerp, on the banks of the river Schelde, offers not only excellent shopping and lively nightlife but also some of the country’s best museums, and some exquisite medieval streets and town houses. Many people only think of Brussels as a city to drive through – that’s to ignore all that it has to offer in the way of culture, shopping, and a cuisine that is often claimed to be the best in Europe. The Grand Place is one of the finest medieval squares in Northern Europe, and its Gothic and Romanesque churches, along with the many museums in the centre of the city, make Brussels well worth a visit.

The first thing to remember is that signs and place names will often be in both French and Flemish, so it’s wise to memorise both. Belgium has an excellent network of motorways and many less busy rural roads which if you are touring are often your best choice. Just remember that many will still operate on the “Priority to the Right” rule, so familiarise yourself with the diamond signs that indicate you have right of way on the major road. Brussels is often the starting point for a tour of the country and the International Airport is a convenient car rental collection point. From Brussels the A10 heads north west via Ghent to Bruges and the N70 is a pleasant off-motorway route to Antwerp. Returning towards Brussels, take the eastern outer ring road and the A3 towards Leuven.