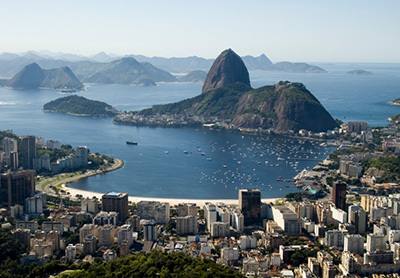 Compare prices and save money on your car rental in Brazil

If you are just back from Brazil, you probably agree that in a sense the carnival of Rio reproduces a scaled-down version of Brazil’s iridescent landscapes and hybrid population. This enormous Latin-American country seems to be dancing to party rhythms all year round, 24/7, doesn’t it? If you have not been there yet, then let us only say that in Brazil there is a multitude of things to do and to go to which satisfies even the most demanding travellers. One of them is Brazil’s pride, the Amazon region, an unprecedented place in terms of biodiversity. Brazil is a land of bright colours, indeed, but also a land of contrasts. It fascinates and lures its visitors with its overwhelming opulence in its natural, cultural, and historical facets. However, Brazil is also, in more than one sense, the world’s cultural crossroads. Modernity and traditions are intricately interwoven here. Its busy landscapes mirror its population, constantly mingling and gathering on any occasion. The colonial and modern buildings, the religious constructions, the international festivals, and the famous monuments, all contribute to the storytelling of five hundred years of history. If you are looking for a memorable holiday, Brazil is the place to be. You will be surprised by the dignified sublimity of this country that somehow clashes with the postcard image we are used to. After a few days in Brazil, you will soon become familiar with the mysterious, mystical, and the strange facets of this uncanny land of irresistible charms.


Firstly, lose yourself in the pantagruelian Rio de Janeiro. Rio’s richness is partly given by its western and Portuguese influences, but Brazil identity goes all the way back to African and Amerindian roots, and in the city you will find traces of German and Italian passages as well. While in Rio, do not miss the opportunity of visiting Christ the Redeemer, its most famous monument, and many more delightful buildings. You will be like thunderstruck in front of Copacabana and Ipanema, paradises on earth with nature in its purest form. There will be nothing like immerging your body in this quasi-religious, spiritual sea. Salvador de Bahia, finally, is Brazil’s oldest city. Lying in a peninsula, Salvador de Bahia once again reflects Brazil’s intercultural attitude. This cosmopolitan city is reckoned one of the cradles of Afro-Brazilian culture. However, it is at present known for its over 360 churches (indicative of the level of Christian worship in Brazil) that brought to the well-deserved nickname of “Black Rome.” By observing its architectural styles, its recipes, and its musical creations, you will understand a little bit of Brazilian creativity.