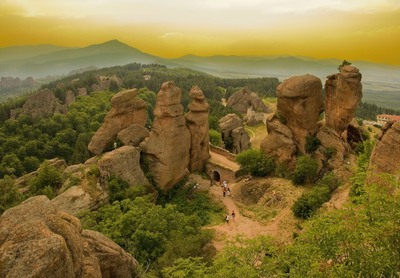 Compare & Save on car rental in Bulgaria

Bulgaria is a country in the Balkans on the western side of the Black Sea. Sandwiched between Romania to the north, Serbia to the northwest, Macedonia, Greece and Turkey to the south, it boasts sublime beaches, modern cities, fantastic mountain ranges and woodland, and plenty of winter sports opportunities too. During the Communist era, the Black Sea was a favorite destination for travellers behind the Iron Curtain. While the country remained off-the-radar to many western travellers in Communist times, now, increasing numbers of western Europeans travel have begun to venture throughout the, finding that Bulgaria is a country that rewards exploration.

Things to Do in Bulgaria

Bulgaria is the perfect destination for climbers and hikers of all abilities, being home to many mountain ranges that draw outdoor walkers from all over the globe. The Balkan, Rila, Pirin and Rhodope Mountains are the main hiking areas, with the best, driest, conditions being between June and September. A must-see is Sofia, one of the oldest cities in Europe, and the capital of Bulgaria. It’s home to lots of parks and cobbled streets, pleasant squares and galleries, and over 250 historic landmarks and architectural monuments. Or if it’s a lazy vacation by the beach you’re looking for, head for the Black Sea coast. Peppered with relatively undiscovered resort towns, and large port cities like Burgas and Varna, it’s a quieter, but just as beautiful and well maintained, beach getaway than anywhere on the Med.

Those touring Europe by car will find many routes into Bulgaria, via Serbia, or Greece via Zlatograd or Ivaylovgrad. The Danube 2 bridge is now open crossing from Romania to Vidin in Bulgaria too. There aren’t any toll roads in Bulgaria, but when crossing the border into the country you do need to pay a small amount of road tax (currently around €5 for 7 days). Major roads are in fine condition, but go off the beaten track and expect to find dirt roads and potholes aplenty – this is still a relatively poor country by EU standards. Many roads are poorly marked, and if you’re not using a Sat Nav you might find that learning just a little of the Cyrillic alphabet will help you decipher their road signs.