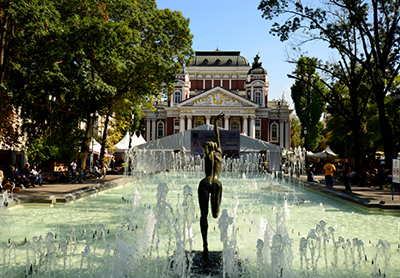 The Sofia International Airport is the largest airport in Bulgaria and is just 6 kilometers away from the centre of the Bulgarian capital. It serves about 3 million passengers every year and is the best landing point for a trip including the cities of Sofia and other wonderful places in Bulgaria. The most comfortable way to travel from Sofia is definitely by renting a cheap rental car. Its central location makes it close to all major points of interest and, in the absence of efficient connections, the rental car is the best way to reach them all. To have your rental car as you as you get off the plane, use GoCarRental.com’s intuitive system that will allow you to compare the prices of all companies operating at the airport (including Avis, Budget, Hertz, Sixt and Alamo), and to book the car you like in advance at a very cheap price. After booking you only have to print the voucher that we’ll send you and take it with you to the car rental, together with a valid driver's license and a credit card and you’re done!

Things to do in Sofia

Once you arrive in Sofia, you'll be utterly impressed by its beauty, even though it is one of the least well sponsored among the other European capitals. The Bulgarian capital is a mixture of different cultures, since it has been one of the main passageways between East and West for centuries, and the third oldest city in Europe after Athens and Rome. The remains of the ancient city are still visible and a yellow sidewalk (also called “yellow mile”, because of the color of the tiles) indicates the ideal route to visit the main monuments of the city without the risk of getting lost. The heart of Sofia is the Nezavisimost Square (Independence Square, formerly Lenin Square) or simply called "Largo", and from there you can visit the interesting archaeological museum, hosting great Greek and Roman collections, the former headquarters of the Communist Party and the Royal Palace (now the National Art Gallery). Moreover, it is worth visiting the Alexander Nevski Cathedral, a huge monument to the Orthodox Christianity. In the same square you can see the Church of San Giorgio. On the nearby Moscovska Street you will admire marvellous art deco buildings. If you have time, take your rental car and go to the National Theatre, one of the most beautiful buildings in the city. Continue to Sveta Nedelya Square, where you can visit churches of all religions, from the mosque to the synagogue and to the cathedral. From this square, talk a stroll through the busiest shopping street in Sofia, Vitosha Boulevard, which leads straight to the 2.000-metre-high Vitosha mountain.

Sofia is located in the immediate proximity of the northern slope of Mount Vitosha, surrounded by the mountains around the valley of Sofia. Four mountain steps lead to the city, the Vladajski, the Dragomaski, the Petrohanski and the Botevgradksi. This makes the Sofia airport the ideal arrival point for a holiday that is not just designed to visit cultural sites, but also to enjoy some hiking and maybe skiing. Mount Vitosha is in fact a major ski resort. Your rental car will come in handy to visit one of the hidden treasures of Bulgaria: less than two hours drive from Sofia there is Plodviv, whom Lonely Planet describes as one of 10 cities to visit in 2015, and calls it "a real hidden gem in Europe". The city dates back to pre-Roman times and it has been an important centre of transit trade between East and West over the centuries, making it open to the influence of both cultures (as we can see in the considerable evidence left).