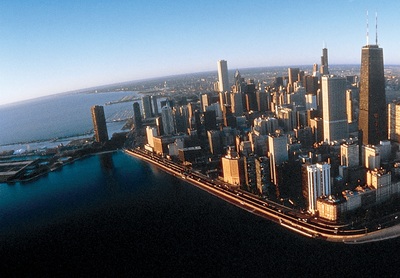 Compare & Save on car rental in Chicago

The city of Chicago, located on the shores of Lake Michigan in the State of Illinois, is the third largest (by population) city in the US, founded on a portage site in 1833. From a settlement of barely 200 people it grew to a population of 4,000 in seven years. Major sections of the modern city are known as The Loop, (centre of the city), North Side, the South Side and the West Side. Chicago’s streets are laid out in a strict grid pattern, which was continued with the expansion of the city. The home of Blues and Jazz, Chicago is famous for building the first skyscraper, as well as being known as the home of the notorious gangster Al Capone during the era of Prohibition. A more recent son to be proud of is the current US President, Barack Obama, who developed his political career in the city. Chicago has a thriving music and nightlife, with many Blues clubs and music bars. Like most American cities you need to arrange car rental to be able to fully explore Chicago, although you might be tempted to take a trip on the famous elevated rail system.

Things to Do in Chicago

The Art Institute of Chicago has a wonderful and wide-ranging collection of paintings, photography and sculpture, and as well as frequent visiting exhibitions the permanent collection includes African art, American Gothic, and works by the Impressionists. To gain a glimpse into the life of the wealthy in the late 19th century, visit the Richard H. Driehaus Museum – it’s one of the few remaining examples of the architecture of the Gilded Age. The mansion was built by a fabulously wealthy banker, the interior a grand display of stained glass, marble floors and sweeping staircases.

For some of the best Blues clubs, explore the North Side of the city, and one not to miss is Kingston Mines, which has a reputation for hosting outstanding musicians. Michigan Avenue in downtown Chicago includes the Magnificent Mile, where you can spot some of the city’s landmark buildings and spend the day window shopping. The John G. Shedd Aquarium displays over 1,500 species, including beluga whales, dolphins, and sea otters, and the Caribbean Reef installation provides a close-up view of the sea life found amongst tropical reefs. For a stunning view of the city and Michigan and Wisconsin on the horizon, take the lift to the Skydeck on the 103rd floor of Willis Tower, and for a heart-stopping experience step out onto the glass-enclosed balcony to really “feel the fear”.

Chicago O’Hare International Airport is a half hour drive from Downtown Chicago, and visitors arranging car rental in Chicago are well advised to do so in advance, and to collect their rental car from the airport on arrival. Searching with GoCarRental.com will turn up the right vehicle for you and the best deals – remember that the majority of cars in the US are automatics. Taking the 1-90 from the airport will bring you directly to Downtown Chicago. Driving in the city, if you are staying with the major routes, is straightforward, but you will definitely need a satnav to locate streets in the more dense grids. Following Lakeshore Drive, which runs from south to north along the shores of Lake Michigan, is a great way to appreciate the beauty of the lake and Chicago’s unique skyline.