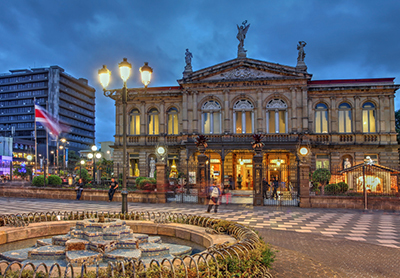 Compare & Save on car rental in San Josè Juan Santamaria

Once you land at this airport, you realise you are in a kind of paradise. The Juan Santamaria airport is modest in size but a real dimensional portal, through which you’ll find yourself plunged into the magic of a land like no other. The best way to reach San Jose, which is about 20 km away from the airport, is surely by renting a car. Besides the great comfort involving this solution, hiring a rental car in Costa Rica will also mean being able to reach all major attractions spread almost everywhere in the country, served by an extensive road network, which is only actual connection in the country.

Things to do in San Josè Juan Santamaria

With your rental car you can reach San Jose in just a few minutes, park under your tree and be ready to visit the city straight away. San Jose will offer to every type of tourist the best entertainment at any time, being a city full of young people and families as well. Costa Rica is called the "paradise on earth", as well as “the happiest country on the planet”, and there is a reason for saying that. Wherever you move with your rental car you’ll be surrounded by colorful toucans and parrots, as well as warm and always smiling people. There is no reason to be sad in Costa Rica!

If you intend to establish your "base camp" in San Jose, know that the city is located exactly in the centre of Costa Rica, and being the smallest country in Central America, it’ll be the best place to start any exploration. With a rental car, indeed, you’ll be able to cover all distances in a very short time. In just over an hour, following the westbound State road 27, you’ll be on the most beautiful beaches of Costa Rica, while taking the State road 1 and then continuing on the 126 you’ll be at La Paz waterfalls in just 1 hour. Two other must-see sights that you won’t forget are definitely the Arenal Volcano and Manuel Antonio Park. The first is an active volcano from which you can see the lava leaking from its craters in a very picturesque setting, the second is the smallest park in the country, but also the most fascinating one. Indeed, you can walk on its pristine beaches behind an unspoilt forest, where thousands of beautifully coloured animals live peacefully, such as toucans and parrots that will keep you company until sunset, when the forest will be dominated by the absolute silence of nature.