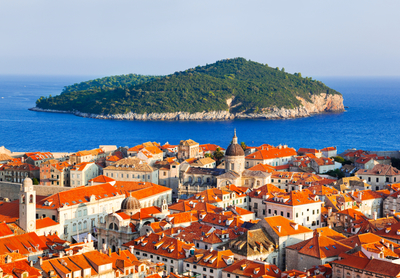 Compare & Save on car rental in Croatia

Croatia is located in a strategic position between Mediterranean Europe, the Balkans and Central Europe, with a coastline on the Adriatic, making it attractive to invaders over the centuries. It has been extensively settled since Neolithic times, and was later settled by both the Greeks and the Romans, some of whose buildings remain to be seen today. The country’s Adriatic coastline is heavily indented, and has more than a thousand islands. Having survived a turbulent recent history, with the break-up of Yugoslavia and the subsequent war with Serbia, Croatia is now an increasingly prosperous country, popular with tourists, and a member of the European Union. The capital of Croatia is Zagreb, and it has seven UNESCO World Heritage sites, including the perfectly preserved historic walled city of Dubrovnik. The country’s major airports are Zagreb, Dubrovnik and Split.

Things to Do in Croatia

The country offers visitors an enormous variety of experiences, from hiking in the lush national park of Plitvice Lakes, with its 16 turquoise lakes, waterfalls and cascades, to exploring the Roman palace of Diocletian in Split. A car is a must to fully appreciate the country, and there are many car ferries linking the main islands, so it’s perfectly possible to “island hop” with a car. Arrange the best value deal with GoCarRental.com ahead of your visit to Croatia so that you can pick up your car rental at the airport of your arrival. Don’t miss a trip to the walled city of Dubrovnik on your tour of Croatia, and from Dubrovnik travel on the coast road to Split to take in the Roman palace, still home to a maze of lively streets and little cafes and bars.

Two of Croatia’s islands that are a must to visit are Korçula and Hvar, with their olive groves, idyllic little beaches, and historic towns. Swimming in the crystal clear waters of the Adriatic is a delight, but many of the “beaches” on the Dalmatian coast are actually rocky bays – and watch out for sea urchins, delicious to eat but painful to tread on! Zadar, in the north-east of the country, is a delightful city to visit, with a well-preserved Roman forum, the churches of St. Mary and St. Simeon, and a unique sea organ which is designed to play tunes to the motion of the waves. Turning inland to the capital Zagreb, with its internationally acclaimed museums, lakes and parks, you pass the historic city of Karlovac, and might turn aside to explore the dramatic mountainous landscapes of Çumberak on the Slovenian border.

Apart from in the more rural and isolated areas the roads in Croatia are in good condition and well signposted. Many main roads are only single carriageway, apart from the toll highways, so progress can be slow on the busier routes. The coast road from Dubrovnik to Split is a popular drive for its panoramic views over the Adriatic and mountain backdrops. European traffic regulations apply, and the major arterial roads in the country are the A1 which links Zagreb with the Istrian Peninsula and runs down the coast towards Dubrovnik; the A3, leading to the Serbian border, and the A6, linking the capital with Rijeka and Trieste over the Italian border.