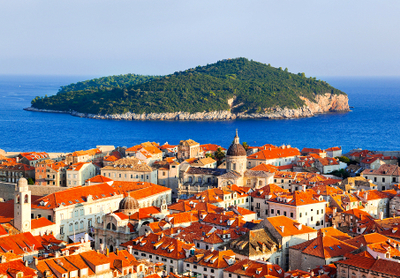 Compare & Save on car rental in Dubrovnik

Dubrovnik is one of the most beautiful of all walled medieval cities, nicknamed “the pearl of the Adriatic”, situated in the far south of Croatia. It was listed as a UNESCO World Heritage Site in 1979. In the war that followed the break-up of Yugoslavia, Dubrovnik was the only community that joined together, regardless of ethnicity, to save their city and repel the Serbian Army. The strong sense of community dates from Dubrovnik having been an independent republic for almost five hundred years, as well as a centre of culture and scholarship for many centuries. In medieval times Dubrovnik rivalled the city of Venice as the trading centre of southern Europe, and today it’s one of the most popular tourist centres on the Adriatic. The walled city itself is pedestrianized, but Dubrovnik provides the visitor with an idyllic base from which to tour the region, and booking car rental with GoCarRental.com will give you the freedom to explore its many gems.

Things to Do in Dubrovnik

The Placa Stradun is the central street of Dubrovnik, and provides not only great shopping but also wonderful views of the Baroque architecture of the houses. Walking the city walls (a 2 km stroll) is a must for every visitor, and the tour gives you a succession of wonderful views over the port and the towers and houses of the old city. The brighter colour of many of the roofs show where buildings have been restored after the damage inflicted by the bombardment during the Croatian War of Independence. Fort Lovrijenac is a towering edifice originally built for the defence of the port and the city, and now open to visitors.

The Sponza Palace is a one of the few original Gothic Renaissance buildings that survived the major earthquake in 1667, and not only hosts a museum but also a poignant memorial room recording the recent defenders of the city. The Rector’s Palace houses a museum tracing the history of the city, and a key landmark of Dubrovnik is the Bell Tower, close to the Ploçe Gate, with its famous green bells. The Old Port has many excellent seafood restaurants to tempt the visitor. There are a number of magnificent Baroque churches, including the Cathedral of the Assumption of the Virgin Mary, the original church having been erected with money donated by Richard the Lionheart. Lokrum Island is only ten minutes by ferry, and offers a relief from the crowds of visitors, and the chance to swim from one of the little rocky coves. Climb Mount Srd for a fantastic view over the town, and for the small museum on the summit.

Most visitors choose to stay outside the walled city, as hotels in Dubrovnik itself are few and very pricy, and arrange car rental to enable them to tour the area. Driving in Croatia is on the whole very pleasant, although even the major routes can get congested at peak times and the main coast road is narrow in places. Some of the minor rural roads are unsurfaced, so you may need to hire a 4X4 if you are planning to explore the depths of the countryside. The coast road (D8) provides wonderful views of the Adriatic, with mountains towering on the other side, and an easy day trip north on the D8 from Dubrovnik is to the Pelješac peninsula and the attractive village of Trpanj. The airport is south of the city, a 15 mile drive on the D8.