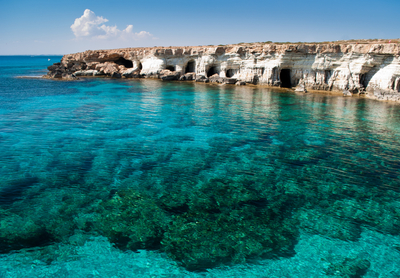 Compare & Save on car rental in Cyprus

Cyprus is located in the Mediterranean, south of Turkey and west of Lebanon. Its position means it gets a fabulous amount of sunshine annually (some 330 days on average!) but it has also attracted many invaders over the centuries, from the Athenian Greeks, through periods of Persian, Egyptian, Byzantine and Ottoman rule until the island was placed under British administration in 1878. The island finally gained its independence in 1960, but there followed division between the Turkish population in the north and the Greeks in the south. There is still a UN ‘buffer zone’ in place but relations have been normalised for many years now. The Republic of Cyprus occupies the southern two-thirds of the island, and the Turkish Republic of Northern Cyprus the northern third. Cyprus’s economy has benefitted enormously from the growth of the tourist trade, and a low tax regime which has attracted some global corporations to the island. There are two international airports – Larnaca, in the south of island, and Paphos, to the west.

Things to Do in Cyprus

Cyprus appeals to a wide range of visitors, from those who want to spend their days swimming and sunbathing and their nights clubbing, to those who are keen to explore the history and archaeology of the island. A car is essential if you want to explore all that the island has to offer and enjoy the many beaches, discover the hidden bays and coves of the coastline, and mountain villages and churches. Car rental in Cyprus can be expensive, so use GoCarRental.com to help you to find the best value deals.

Nicosia – the Venetian walls of the old city

The capital, Nicosia, has some wonderful museums and historic buildings, including the Cyprus Museum which showcases the island’s early history, and the Byzantine Museum, with its outstanding collection of icons and religious artworks. The Troodos Mountains will appeal to walkers, and there are a number of hiking trails that link some of the picturesque villages. The island’s coastline is wonderfully varied, some of it quite built up but offering all the attractions of hotels, bars, golden beaches and a thriving nightlife - Ayia Napa is one of the best examples. The western side of the island is much less developed, and if you hire a 4x4 you can follow the dirt roads down to the edge of the coast, or explore Meleti Forest. Avakas Gorge offers superb scenery and some good hiking trails.

A piece of good news for UK visitors is that Cypriots drive on the left, so there’s no difficult adjustment to be made. Main roads linking the major towns and resorts are well-maintained and many are signed in English. A motorway system links the two international airports with the capital (the A6 and A1 from Paphos, and the A5 from Larnaca). If you want to explore further afield you will need a 4x4, as most of the minor roads are unsurfaced.