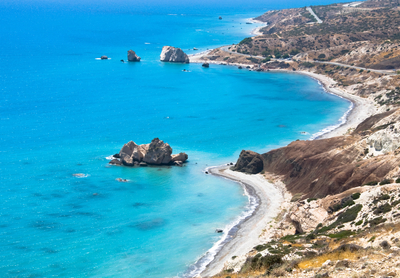 Compare & Save on car rental in Paphos

Paphos lies on the southwest Mediterranean coast of Cyprus, about 45 miles west of Limassol, and has a small but busy airport which serves both charter and scheduled flights. The town is famous in Greek legend for having been the birthplace of the goddess of love, Aphrodite. In classical times Paphos was the capital of the island, and there are extensive historical remains from Greco-Roman times. The city has been selected as the European city of Culture for 2017. Modern Paphos is divided in two, with the upper town being the commercial and shopping centre, and Kato Paphos surrounding the harbour and the coast. A promenade has recently been built to improve the lower town, running from the town to the marina and a long coastal path. The city has excellent road connections with the rest of the island, the A6 motorway running alongside the coast to Limassol and onwards to Larnaca, which makes it an excellent base for exploring the island. Bus services between towns are erratic, so visitors should arrange car rental to enjoy exploring untrammelled by timetables

Things to Do in Paphos

The city’s classical heritage is unmissable, and the first place to see on any visitor’s list should be Kato Paphos Archaeological Park, with its almost complete mosaics and amphitheatre. St Paul’s Pillar in the centre of Paphos is where the saint supposedly preached, and is close to an ancient church, a haven of peace in the busy town, with recently excavated mosaics on show. Agios Neophytos Monastery is easily reached by car from Paphos, and there is a small museum, wonderful paintings and icons and a grotto. Paphos Municipal beach is a perfect place for a swim if you are staying in the town, and it’s free from water sports and jet skis, so safer for younger swimmers.

A visit to Aphrodites Rock is a must, reached by s short car journey along the coast, and the towering rock formation against the blue of the Mediterranean repays the journey. For either experienced or novice scuba divers, the Dive Point Centre in Paphos will provide great experience of diving around the rocky coast. Episkopi Village, some eight miles northeast of Paphos, is situated in the Ezouza Valley, a tranquil and beautiful spot, and the village itself is famous for its towering cliff face, winding streets and old houses. The village now has an Environmental Centre with a garden and displays to show off the local flora and fauna.

Car rental in Paphos can be arranged through GoCarRental.com so that you can either take advantage of a few days exploring the town before venturing further afield, or collect your rental vehicle from the airport on arrival. The main road network in Cyprus is excellent, and take advantage of being mobile to visit the Akamas Peninsula and Avakas Gorge, an area of outstanding natural beauty in the far west of Cyprus, a 35 mile drive from Paphos. The B20 runs through the centre of Paphos and gives access to the western coastline, and the airport to the east.