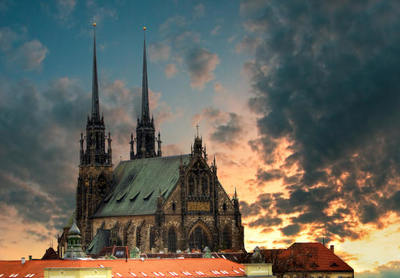 Compare & Save on car rental in Brno

Brno is the biggest city in Moravia, which is one of two historical regions (the other being Bohemia) that form the Czech Republic. The Czech Republic’s second-largest city by population and area, second to Prague, it was founded around year 1000 and is considered the modern and historical hub of Moravian culture. Around 380,000 people stay in Brno, and its location between the Moravian Karst and the beautiful South Moravian vineyards makes it an increasingly popular draw for tourists to the country. While Bohemia is associated with beer and bustling cities, Brno and Moravia are all about wine and rolling hills.

Things to Do in Brno

Without a doubt, a wine tour is essential when you hit Brno. The South Moravian vineyards are beautiful to explore, and increasingly regarded around the world for their fine produce. The city itself is packed with museums and galleries, and renowned for its stunning architecture – a far more laid back and old timey alternative to boldly modern Prague. In the 1920s, Brno was well known as being a centre for stunning modern architecture in the Functionalist and Bauhaus styles, and if you’re a fan of this era a must-see is the Vila Tugendhat, designed by Mies ven der Rohe in 1930. And take some time to explore Namesti Svobody, Brno’s elegant and spacious central square, home to the famous House of the Four Mamlases.

Driving into Brno is an easy drive thanks to the D1 highway from Prague, and a whole host of national roads. Is using the highway you will have to buy a toll sticker to do so. This is highly affordable, with prices varying on how long you plan to drive for. Outwith the main city, you’ll find an array of fantastic cities and destinations to explore by car, with all of the following being awarded UNESCO World Heritage status: Olomouc (1.5 hours away), Telc - one of the most beautiful towns in the Czech Republic (2 hours), Lednice-Valtice - one of the largest artificial landscapes in Europe dotted with Palaces and Follies (1 hour) and the Blansko caves (45 minutes).