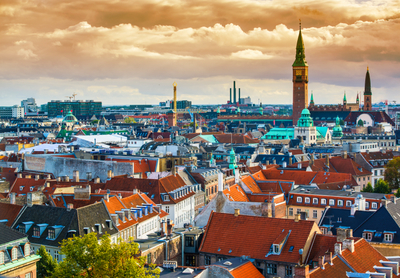 Compare & Save on car rental in Copenhagen

The most cosmopolitan city in Denmark, if not in the whole of Scandinavia, Copenhagen is the capital of Denmark and home to one million Danes. Large enough to provide plenty in the way of chic shopping, exciting culture and nightlife, it’s also small enough to make navigating a cinch. Situated next to the Øresund strait, Sweden is just minutes away, and so Copenhagen serves as a kind of cultural blend between mainland Europe and Scandinavia. Old fairy tales mix with futuristic architecture, enviably modernist design, cool new music venues and galleries, and more. Canals are everywhere, giving Copenhagen a laid back pace, alongside cafes, cobbled squares and copper church spires. It’s the perfect base from which to explore the rest of Denmark, to hop over to Sweden, or to drive down into mainland Europe too.

Things to Do in Copenhagen

Copenhagen is something of an art lover’s dream, with galleries and museums dotted all over the city, mixing the old with the cutting edge. A great place to start is the Statens Museum for Kunst – the Danish National Gallery, which is located just next door to the beautiful botanic gardens and glasshouses. For modern art head further south to the Arken Museum of Modern Art. If you’re looking for something to do in the evening, try the cobbled streets around the university for delicious traditional dining as well as cool vegan hangouts with a student vibe. And to work off all the grub, make for the famous Tivoli Amusement Park, located slap bang in the centre of the city, and home to fake lakes and thrill rides aplenty, all housed within a beautifully lit city park.

Downtown Denmark is within easy reach of the main airport, Kastrup. For a quieter route and flight you might want to consider the alternative Sturup Airport (MMX) in Malmö, Sweden as well as this is only half an hour’s drive from central Malmö and from there 30 minutes by train to Copenhagen Central Station. Further places of interest to explore outside of Copenhagen itself include Elsinore, one of the biggest old cities in Denmark and home to the famous Kronborg castle, home of Shakespeare\'s Hamlet. There is also Hillerød, a small town with a huge palace and baroque gardens, as well as Roskilde, the country’s ancient capital and World Heritage site, its cathedral full of the tombs of ancient kings, and the city home to the renowned Viking museum.