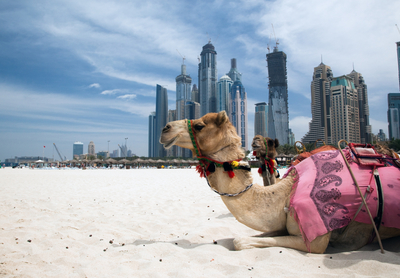 Compare & Save on car rental in Dubai

Dubai is on the southeast coast of the Persian Gulf, one of the seven emirates that make up the United Arab Emirates (UAE). The very earliest record of the area was by a 16th century Venetian pearling trader, and the settlement of Dubai was recognised by traders in the following century. A significant change to its fortunes came with the arrival of the Al Maktoum dynasty, who left their traditional home after tribal feuding, and in 1833 settled in Dubai. In 1879 Dubai came under British protection, which continued until the withdrawal of the British from the Persian Gulf in 1971. Dubai then joined with Abu Dhabi and five smaller emirates to make up the UAE. The prosperity of the modern emirate is founded on oil and tourism, Dubai having become an increasingly popular tourist destination over the last twenty years. The currency is the UAE dirham, and the weekly day off is Friday.

Things to Do in Dubai

Tourists planning a trip to Dubai often focus on sun, sea and sand – they are all there for the taking, but a visit to the city can be even more rewarding territory if you arrange car rental through GoCarRental.com and explore the surrounding emirates. The city’s beachfront is a delight, with some of the longest white sand beaches in the world. Scuba diving is a popular activity, with fascinating wreck sites and coral reefs to be explored. The Marina Walk along Modern Dubai’s Marina offers a sight of the towering skyscapers and luxury hotels that line the waterfront, as well as a beautiful beach, restaurants, shops and a lively market. Dubai is famous for its shopping, and many are based around a theme or specialise in a particular range of goods.

Mall of the Emirates

Mercato, on Jumeirah Beach Road, is a Renaissance-themed shopping mall, and the Mall of the Emirates not only has many luxury designer stores but also a Ski Centre! The Gold Souk is a traditional market specialising in selling gold, and the visitor will be dazzled by the glitter and opulence. For a glimpse into “how the other half lives”, the 7-star Burj al-Arab Hotel is an eye-opener, and not to be missed on your visit are the Burj Khalifa, the world’s tallest building, and the 270 metre dancing Dubai Fountain. There are some fascinating places to explore in the area, so having booked car rental through GoCarRental.com try a trip to Al Ain, the Garden City, and Jebel Hafeet, the highest point in the UAE. The route has breathtaking views. Khor Fakkan offers a break from the pace of city life, wonderful scuba diving on coral reefs, the most picturesque situation in the UAE, and is only a two hours’ drive from Dubai.

The roads in the city and across the emirates are superb, as you would expect, although the system of junction numbering can be confusing and signs are in Arabic, so satnav is definitely a requirement. Dubai is car city, and getting around easy, but first-time drivers in the city will find the driving style sometimes fast and aggressive. Dubai’s road toll collection system – Salik – uses a tag on the vehicle windscreen to record it as it passes through a tolling point. Your car rental company will explain the system to you. Driving from Dubai Airport to downtown Dubai is straightforward – taking the Sheikh Rashid Bridge over the river from the airport, and joining the E11 which leads into the city.