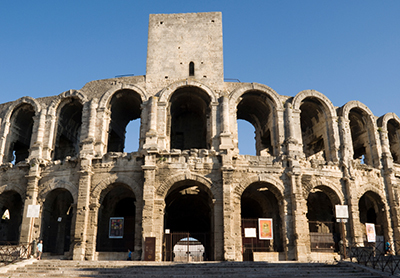 Compare prices and save money on your car rental in Arles

Many a powerful civilization has left its footprint in Arles. Unsurprisingly, this has turned the city into a perfect destination for tourists. The remains of the past still make people wonder and daydream. What is then the best way to discover the attractions of Arles, the enchanting city? Well, hiring a car on GoCarRental.com, to be sure! In the middle of the remains of its rich past, Arles conceals a number of activities and experiences. The city is located in the region Provence­Alpes­Côte d'Azur, right between Nîmes and Marseille, and it belongs to the Bouches­du­Rhône department, in the southeastern part of France. The location is gold. However, Arles charms its visitors not only with that but also with its forty­four landmark monuments and its four huge museums. Arles is a city rich in art and history, as a quick scanning of the UNESCO World Heritage Site List will confirm. It is built on a rock area north of the Rhone, in the heart of the Camargue, La Crau, and the Alpilles. Arles’ natural sights are captivating for the tourist especially due to their outstanding fauna and flora richness. The Regional Natural Park of Camargue, for instance, leaves you in awe for its boundless biodiversity. On your walks in the Park you will observe several species of birds, pink flamingos, European pond turtles, and Coype.


Several ancient remains form the historical core of Arles. Walk through the ancient city streets and enter the ancient theater with its porch, orchestra, and pit. Or visit the amphitheater, one of Arles proudest possessions. The arenas, common to the whole Provence area, are still the meeting point for tauromachy enthusiasts. In the Constantine baths you will be walked through the curious construction plans of these wonderful pieces of architecture. Les Alyscamps d’Arles, a large Roman necropolis, is another must­see. Les Alyscamps d’Arles are prestigious graveyards that enjoyed a great fame and reputation during Roman and medieval ages. They are not as popular with mainstream tourists though, and so much the better for you. Far from any hindrance, you will be discovering this cemetery which, though relatively far from the historic city center of Arles, is absolutely worth a visit. Ditto for the Saint Césaire of Arles Church, where you can admire the southern Gothic architectural style. This church was built in 1450 and was implemented and renovated in 1492 (the first two spans, unfortunately, were destroyed during a fire in the seventeenth century.) Overall, the visit proves satisfying and surprising. But, truth be told, there are many other churches and monasteries worth a shot in Arles. By each of them you will learn the history of this sumptuous city.