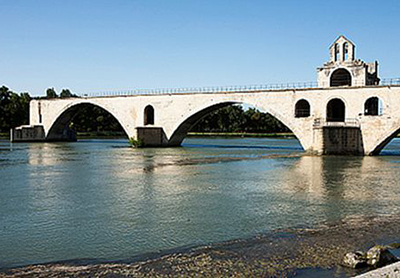 Compare prices and save money on your car hire in Avignon

During your stay in Avignon, you’ll want to freely move around and outside the city. The best way is to hire a car with GoCarRental.com. It is cheaper than you think! Avignon is located in Vaucluse and is bordered by the Rhône to the east and by the Durance to the south. It has been nicknamed the "city of the popes" and is one of the few French cities that maintained its historic center intact. Avignon owes its nickname to the past presence of popes (and, well, of anti-pope Catholics as well). Its main monument, the middle-age Palace of the Popes, is the most impressive and imposing Gothic building in France. The Palace of the Popes is an important clue of Avignon’s strong link with religion. Strikingly, Avignon remained property of the Catholic Church until 1791. After the French Revolution, it joined France for good. Nowadays we can still see its fourteenth-century defensive walls totaling to over four kilometers. They are placed in the core of the old town and are dotted by thirty-nine towers and seven gates. Given its religious overtones, Avignon might be different from your previous trips.

Avignon is rich in small palaces sumptuously adorned by the cardinals who formerly resided here. There are several of them, spread all over the fortified historic city center. After having taken a look to these famous monuments, you can head to the famous Pont d'Avignon. Also known as Saint Benezet’s Bridge, it is mentioned in the famous folk song "Sur le Pont d'Avignon." It has been partly destroyed by the floods of the Rhone occurred over the centuries, so that the bridge has currently only four of its original twenty-two arches.

On one of them, you can view the Saint-Benezet chapel, whose peak hosts the Saint-Nicolas chapel. Avignon is also an important center for arts and culture. The city hosts several exhibition venues, and among them we highly suggest the Calvet Museum, the Museum of the Petit Palais, the Hotel de Caumont and, well, many more! Avignon has an abundance of theatres and performing art festivals too that attract a lot of creative people. In particular, Avignon "Off" festival is a great occasion to discover modern plays mostly staged en plein air in the old town streets.