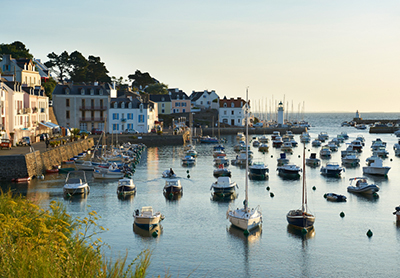 The stunning island Belle-Île is located in the Atlantic Ocean. Formerly called Vindilis – it was named so by the geographer Ptolemy - Belle-Île is the largest Ponant Island and consists of four municipalities: Bangor, Locmaria, Palais and Sauzon. In the past, Belle-Île was often target of numerous pirate attacks, and, while now entirely safe, it retains a wild nature and an outstanding landscape. Here you will spend some quality time in the thick of a luxuriant nature. By a rental car you will discover the most beautiful places in this wonderful island! Subject of the famous song by Laurent Voulzy, the name Belle-Île is enough to have us daydreaming. This is one of those rare cases where reality overcomes fiction since Belle-Île displays an exceptionally beautiful insular landscape carefully preserved in order to keep its natural areas intact. Skirted on both sides by beaches and dense groves, Belle-Île has the typical island texture with the asset of very fascinating mobile gray dunes. The island is populated by rare fauna and flora which completely catch travelers in contemplation of plants like the tar dodder, the carrot "gadeceau," or the "holosté" plantain. Belle-Île also abounds in animal species that can be found only there, including rare species of nesting birds. Specialist in natural environments and tourists agree in describing Belle-Île as the perfect destination.


As can be suspected by its slightly lyrical name (meaning “Beautiful Island”) and the classically-nuanced “Insula Bella,” it is clear that throughout the centuries Belle-Île has been admired for the emotions it arouses. And indeed, its colours and wildlife attract visitors and inhabitants alike. Unsurprisingly, Belle-Île has inspired many writers and painters who in turn contributed to the enrichment of the island’s artistic and cultural heritage. If you are a history nerd, Belle-Île has also many ancient military facilities where you can inquire over the history of defensive structures. However, there is no lack of more entertaining sites such as Pointe Colts, the Great Lighthouse, or the Belle Fontaine. If your belly guides your choiecs, then you are in the right place. Belle-Île offers plenty of lush food from agricultural production and fishing activity. Gourmets will not be disappointed by the tastes and aromas of the local products (we suggest a taste of Belle-Île’s goat cheeses). On the same gastronomic lines, here you can enjoy the famous chicken “aux krassens,” a typical Belle-Île delicacy. Also known as "chimpout," it is a traditional chicken stew accompanied by krassens (which are some very savory fritters cooked in broth).If you are fascinated by marine life, here you can find barnacles, some extremely rare crustaceans that can be found in but a few places in the world. To help you relaxing during your stay, Belle-Île bursts with sports activities, especially nautical ones. Enjoy some private quality time in Belle-Île, either in a wild saltwater jacuzzi or under the savvy fingers of a masseur. Finally, do not leave without having tried a diving session and some offshore fishing on a boat trip!