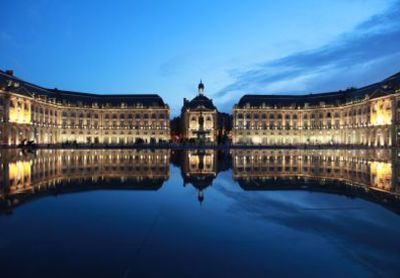 Compare & Save on car rental in Bordeaux

Bordeaux is the capital of the department Gironde in the Aquitaine, and is one of the largest cities in Europe. It first became an important settlement under the Romans as being ideally sited for a trading centre on a broad bend of the Garonne river leading out to the Gironde Estuary. Following the fall of the Roman Empire the town suffered numerous attacks by the Goths and Visigoths, and there followed centuries of relative obscurity. From the 12th century onwards, with the marriage of Eleanor of Aquitaine to King Henry II of England, Bordeaux regained its importance, and a flourishing wine trade developed. The city centre is located to the south-west of the Garonne, and still retains many of its old stone mansions and grand terraces. From its early beginnings in the 12th century, the wine trade has grown to give Bordeaux its place as the major wine capital of the world.

Things to Do in Bordeaux

You will definitely want to arrange car rental for trips outside the city, not least to visit some of the famous wine chateaux nearby, but the city itself probably rewards being explored on foot. The Golden Triangle, the area of Bordeaux where you can enjoy the impressive 18th century architecture whilst browsing the shops and enjoying lunch at one of the many fine restaurants, is a good starting point. Head for the area between the Cours de l’Intendance, the Cours Clemenceau and the Allées de Tourny. The Place de la Comédie, with the magnificent Grand Theatre as its focal point, is a neo-classical delight, and the nearby Esplanades des Quinconces, some thirty acres of open space with a famous fountain and the Monument des Girondins at its centre, is unmissable.

Bordeaux offers a wonderful choice of museums – given the city’s history of wine trading, a visit to the Musée du Vin et du Negoce is probably obligatory. The Musée d’Aquitaine provides the visitor with a fascinating view of the history of the region, and the Musée des Beaux Arts has an excellent permanent collection of paintings from the Renaissance onwards. Of an evening , don’t miss the breathtaking sight of the Palais de la Bourse floodlit and reflected in the shallow waters of the Miroir de l’Eau. Outside the city, if you’ve booked car rental, plan a tour of some of the major vineyards and visit the magnificent chateaux in the surrounding countryside – Chateau d’Agassac in Ludon-Medoc, and Chateau Bardons in Cadaujac amongst them.

Getting around the city on public transport is easy, but you will definitely need a car to explore further afield. Investigate the best deals with GoCarRental.com and arrange to collect your car rental in Bordeaux or at the airport on arrival. From the airport to the centre of the city is a half-hour drive; Bordeaux is encircled by the A10 and A630 motorways, so as long as you head for the right junction, getting out of the city could not be easier. You will need satnav to negotiate the different areas of Bordeaux, and the recommendation is to leave your car parked up and explore the centre on foot.