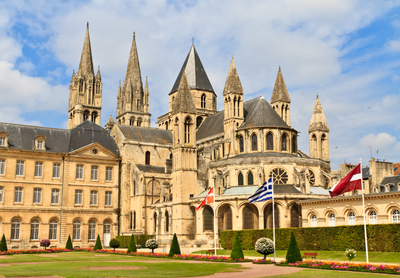 Compare & Save on car rental in Caen

Caen is the capital of lower Normandy in the department of Calvados, and was the closest city to the D-Day Landing beaches in World War II. As such, it suffered considerable damage towards the end of the war in the Battle of Normandy, but many of the historic buildings have been reconstructed, and the modern city is a thriving and attractive base from which to explore Normandy. Caen is proud of its connections with William the Conqueror, whose castle still dominates the skyline, and who chose to be buried in Caen. The city boasts numerous restaurants devoted to the delicious specialities of the region, many of them based on the rich dairy products of the countryside round about, and the apple orchards of Lower Normandy. The city is now based a little back from the sea, with the port of Ouistreham linked to the city by an attractive canal. The dockside café in Ouistreham where a small forward contingent of the British D-Day forces first set foot on land, prompting a spontaneous outburst of “La Marseillaise” from its customers, can still be seen.

Things to Do in Caen

The public transport system in the city itself is excellent, with a light rail system and a good bus network, but the majority of visitors will want not only to explore the sights of Caen itself but also to visit the historic beaches and surrounding countryside, for which a car is essential. Arranging car rental in Caen through GoCarRental.com ahead your trip is recommended, giving you the best deals and choice of vehicles. Caen Castle is a must-see for every tourist – a massive fortress built of Caen stone by William I, and subsequently taken over by the English during the Hundred Years War, it’s now a museum and Fine Arts Gallery.

The Abbaye-aux-Dames, founded by William’s wife Matilda, is a masterpiece of Norman Romanesque architecture, and there are daily guided tours around the Abbey. The Vaugueux district of Caen is a delightful area to explore, with its medieval timber-framed houses, leafy squares and numerous small restaurants. In the surrounding region there are numerous historic and memorable sites to visit – the D-Day landing beaches of Omaha (the US landings), the American cemetery nearby, and Arromanches with remains of the Mulberry harbours still in place. A visit to Bayeux to view the famous tapestry is another unmissable trip. Top Three Attractions Caen Castle, Museum of Normandy and Fine Arts Gallery Abbaye-aux-Dames D-Day Landings Beaches

An economical way to arrange travel is to take a ferry from Portsmouth as a foot passenger and collect your car rental on arrival in Caen. Many visitors will choose to fly to Paris and drive on to Normandy; Caen is connected to a network of autoroutes and main roads, giving access to Paris on the A13, Rouen on the A13, and Tours and Le Mans on the N158 and N138. The attractive little fishing port of Honfleur is a short drive away on the A13 and A29, while the N13 takes the visitor to Cherbourg and Barfleur. Caen itself is surrounded by a ring road, making access to different areas of the city relatively straightforward.