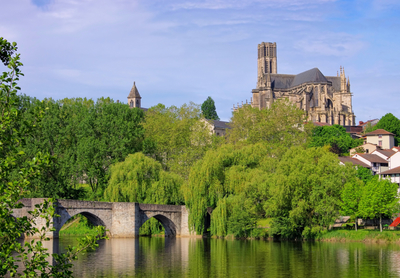 Compare & Save on car rental in Limoges

Limoges is a historic city, built on the banks of the Vienne river, and capital of the Limousin in the Haut-Vienne region of France. The city was founded by the Roman Emperor Augustus in 10 BC, with the city being laid out in the Roman grid style, with an amphitheatre, baths, and a forum. After the fall of the Roman Empire and the sacking of the city by Germanic tribes, the site of the modern city was established where it could be fortified and more easily protected. An Abbey and castle was constructed in the 10th and 11th centuries, and in the 14th century the city was besieged by the Black Prince. Modern day Limoges is a prosperous city popular with tourists, and famous for its historic enamel work, and for being the birthplace of the painter Auguste Renoir. Limoges has excellent transport links, with an international airport just 8 miles from the city centre, and a high speed rail line. Car rental in Limoges can be organised right here through GoCarRental.com with collection points at the airport or in the city if you are arriving by rail.

Things to Do in Limoges

The Gothic Cathedral is an extraordinary building, notable not least for its mix of styles – it was begun in the 13th century and finally completed in the 19th. Visit the tomb of Jean de Langeac, the Bishop of Limoges, with its dramatic sculptures of the Apocalypse. Another, very different cathedral-like structure, is the city’s railway station built in the 1920s, and a unique Art Nouveau station, named “the most beautiful in Europe”, with its 60 metre high clock tower. The tiny Chapelle de Ste-Aurelian is a jewel, treasured for its simplicity and peacefulness, and Baroque architecture.

The Musée des Beaux Arts contains a wonderful collection of Renoir, as well as having exhibitions on the history of Limoges, and ancient Egyptian treasures. The Quartier de la Boucherie is worth visiting for its medieval streets, half-timbered buildings, and narrow alleyways – not to mention the excellent restaurants serving Limousin specialities. Le Souterrain de la Regle offers a fascinating glimpse into the tunnels carved in the volcanic rock under the city, many of them original Roman aquifers, and later used as food storage places during sieges of the city.

No stay in Limoges would be complete without visits to the surrounding Limousin countryside. Car rental is essential to provide you with the freedom to explore. The A20 autoroute , the “Occitane” passes to the east of the city, giving access to Paris in the north, and Brive-la-Gaillard and Toulouse in the south-west. The Avenue Albert Thomas crosses the city and is a good focus point for the driver trying to navigate their way around; it’s a good idea to familiarise yourself with the different areas of the city on your arrival, and you will soon find driving in Limoges pretty straightforward.