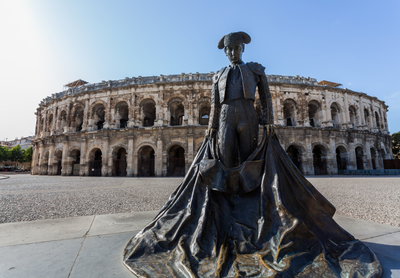 Compare & Save on car rental in Nimes

Nimes is a very popular tourist destination, not least because of the Roman buildings that still remain as a reminder of the importance of the city n the time of the Roman Empire. Nimes airport is small but has regular flights from the UK, and there is a high-speed rail link to Paris and the French Riviera. The Emperor Augustus developed what has until then been a small garrison town, building a forum, temple, amphitheatre, and aqueduct, which became the Pont du Gard where it crosses the River Gard. Over the past two centuries the town grew in importance as a commercial and manufacturing base, and was strongly involved with the textile trade. Denim, the blue jeans material, originated from Nimes (serge de Nimes).

Things to Do in Nimes

Apart from exploring the fascinating Roman buildings and the historic sites of the city, Nimes is also a great base from which to explore the extraordinary landscape of the Camargue, home to migrating wild birds and the wild white horses, symbol of the region. The spectacular scenery of the Cevennes is close by, as are the historic towns of Montpellier and Arles. Car rental in Nimes should be planned ahead of your trip, to ensure that you get the cheapest deals and find the vehicle of your choice, and browsing GoCarRental.com will give you all the information you need. No visit to the city is complete without touring the remains of the Roman city.

Visit the amazingly well-preserved Roman amphitheatre, built in AD 100 to seat 24,000 spectators, still with its upper stories intact, and the various passages and entrances that kept the patricians apart from the hoi-polloi. The Maison Carré is a rectangular temple erected by the Emperor Augustus to honour his two sons. The Archaeological Museum provides an abundance of Roman and prehistoric artefacts, and tells the story of Nimes and the locality down through the centuries. 15 miles northeast of the city, the Pont du Gard is one of the most impressive sights in France – three tiers of brick archways built by the Romans to carry the fresh water from the River Eure across the Gard, at a height of 69 meters.

If you have arranged car rental collection from Nimes Airport, the drive in to the city is an easy 9 miles, with a choice of taking the toll autoroute, the A54, or the local D42. As with many historic cities, the advice is not to stray into the maze of streets in the old town but to explore them on foot. But you will find your car essential to visit the Pont du Gard, (the A9 from Nimes, turning off for the D6086), the walled city of Arles, and to explore the mountainous ranges of the Cevennes.