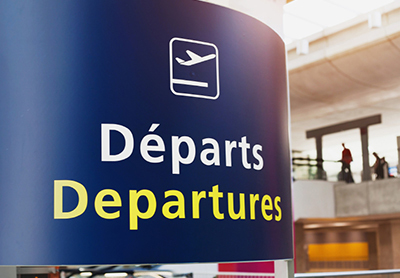 Paris­Charles De Gaulle (CDG) airport, some 25km north­east of Paris, is the most important airport in France and ranks among the top­notch airports in the world. It is currently the second busiest airport in the world for number of international passengers and number one in Europe for goods and passengers. Its location after all makes it quite the perfect point of departure for visiting Northern France, particularly with a little help from a rental car. In this way, it will be pretty easy to reach Paris and the many nice sights of the ville lumière. Getting to Versailles or Disneyland Paris will turn into a comfortable journey, one that enables you to see the fascinating French country from your car windows. Think about that cheese wheel you saw while crossing in a hurry a French village: isn’t it lovely to stop your rental car and have a taste of it, perhaps with some French wine? That is why we suggest taking a look at our online outstanding proposals. It does not matter whether you are a young couple or a group of friends on holiday: nothing will be easier than choosing the right car for you.

What to do in Paris – Charles de Gaulle airport

Once you are in Paris, there are plenty of things to see and do, especially with a rental car. The reason is simple: Paris is a city that has developed throughout a long stretch of the Seine. However, many of Paris must­see spots are somehow far­off from the city center. Take La Défense, the ultra­modern financial district: moving from there all the way to the more typical districts such as Belleville or Montmartre will be easy and quick with a rental car. Since the city is enormous and you will be probably staying only a few days, shifting swiftly from one place to the other is an important asset for your journey. It would be impossible to short­list some places to see in Paris. However, let us hint at least at Père Lachaise, a famous cemetery where you can pay homage, among the others, to Jim Morrison and Oscar Wilde; or the long­standing library Shakespeare and Company, located in the Latin Quarter and for years a beat­generation symbol.

In the surroundings of its airport, Paris is not the only choice to pick. With a rental car, you might also consider driving northward to an area which includes a number of natural reserves and typical villages that lie in the thick of the French country. Somehow under­estimated, the vastly interesting Parc Astérix is a theme park that grants many hours of great fun with your children, all the while being surrounded by the green area of the Oise Park. For those who love adventure, let us suggest Sherwood Parc, an extremely wide area where you can do a lot of open­air activities such as climbing on trees and crossing rope bridges! Yet, we can help our nostalgia fans too: pay a visit at the Renaissance Museum in the majestic Ecouen castle!