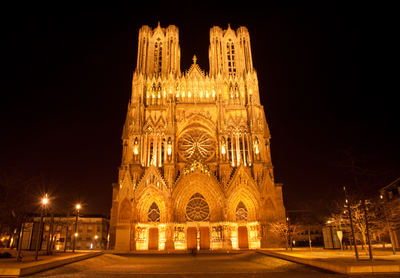 Compare & Save on car rental in Reims

Reims is in the Champagne-Ardenne region of France, and is famous for its cathedral, which was the site where the Kings of France were always crowned. Before the Roman invasion of Gaul Reims was originally the capital of the Remi tribe – hence the city’s name – and was later to be one of the earliest Christian bishoprics. It was a frequent meeting place of Popes, Kings and Emperors of the Holy Roman Empire through the centuries, and the English were unsuccessful in their attempts to capture the city. Joan of Arc rallied the French against the English invaders, and arranged the consecration of Charles VII in the cathedral. In the last century, the cathedral was badly damaged in the First World War and suffered further under the bombardments of World War II. But it was also the site of one of the most historic moments of the last century – the signing of Germany’s surrender at the HQ of the Allied Expeditionary Force and the ending of the war. There has been extensive and on-going work to restore the historic buildings of the city over the last five decades.

Things to Do in Reims

Most visitors to Reims will have flown in to the nearest international airport (Paris Orly) and taken the A4 autoroute to Reims. There are fast trains from Paris, and car rental in Reims is easy to arrange through GoCarRental.com ahead of your visit so that you can collect your rental car on arrival. Top of every visitor’s list must be Reims Cathedral – with its breathtakingly beautiful stained glass windows and visible bullet holes on the outside wall, evidence of the fierce fighting in the city in the last war. The cathedral is designated as a World Heritage Site by UNESCO, and a great way to learn more of its history and get to see the 20th century restoration work, is to take the trip to the top of the towers of the cathedral.

Museum of the Surrender

The Palais du Tau, another UNESCO World Heritage Site, and the former palace of the Bishops of Reims, was the resting place for the Kings of France before and after their coronation. It now houses priceless tapestries, and many of the original statues from the cathedral. The Mars Gate is situated at a cross roads at one of the entrances to the city, and stands in an attractive park. It is one of the few Roman buildings still standing, and also carries the mark of bullet holes from later battles. The Museum of the Surrender shows film of the surrender at the end of World War II, and has some fascinating memorabilia from the actual day in the permanent exhibitions. Top Three Attractions Notre-Dame Cathedral Palais du Tau Museum of the Surrender

The city centre is very compact and best explored on foot, but Reims is ideally situated for exploring the wider region, and having arranged car rental, plan for day trips to Metz, the Regional Park of the Mountain of Reims, and the historic sites of First World War battles at Verdun and Cambrai. The A4 leads directly from Paris to Reims and is a toll autoroute, turning south when it reaches Reims to the attractive town of Chalons-sur-Marne. The A26 heads north-west out of the city to St Quentin.