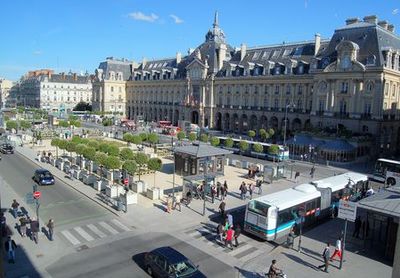 Compare & Save on car rental in Rennes

Rennes is a small city in Brittany, often overlooked by the visitor in favour of some of its more famous neighbours, but it offers all the advantages of its location and size, as well as being an attractive and interesting town in its own right. The city was one of the last strongholds of the Roman Empire, with its defenders building red sandstone walls to encircle the city and keep out marauding tribes. In modern times, the city suffered extensive damage during the Second World War, and enormous efforts were given to its reconstruction, making it the fastest growing city in France after Toulouse. The university gives the city a vibrant cultural life and lively music and nightclub scene, and the Rue St Michel in Rennes is famous for both sides of the street being lined only with bars. Rennes Airport, served by some of the UK’s budget airlines, is only 5 miles from the city centre, and Rennes is a perfect base from which to explore Brittany and Normandy, with St Malo, Mont St Michel, Bayeux and Nantes all being within an easy drive. GoCarRental.com offers the widest choice of vehicle and best deals on car rental in Rennes.

Things to Do in Rennes

The 17th century Parliament of Brittany is both a fine building and one of Rennes most popular tourist attractions, offering guided tours and a view of the turbulent history of the area. The Champs Libres, a futuristic building in the centre of Rennes, houses the Museum of Brittany, the Espace des Science, and the City Library, which houses 500,000 documents on six floors. The museum and Espace des Science make for a great day’s visit for the family, with a planetarium, a laboratory where visitors can conduct their own experiments, and a view of Brittany’s history from pre-Roman times to the present day.

Centre Historique de Rennes, the old town with architecture ranging from the medieval to the 18th century classical

Rennes is notable for the number and beauty of its parks, and any visitor is encouraged to explore them during the summer months. The Thabor Gardens, which stretch over 10 hectares in the city centre, encompass fountains, formal gardens, aviaries, and a famous rose garden. Tanneurs Park creates a green corridor running from the city centre to the natural meadows of Saint-Martin on the outskirts. Close to Rennes is the attractive Ecomusée du Pays de Rennes, a permanent exhibition taking the visitor through the history of farming and country life in the region. Top Three Attractions Centre Historique de Rennes, the old town with architecture ranging from the medieval to the 18th century classical Champs Libres Parliament of Brittany

The centre of the city is largely pedestrianized or reserved for buses, so the motorist is advised to explore the centre on foot. Traffic in the city can be heavy at peak times, but Rennes is quite easy to navigate, with a ring road (the N136) encircling the city, and major roads leading off it in every direction, like the spokes from a wheel hub. Having arranged car rental, take the N24, heading west, for the Brittany coast, while the A84 leads to Mont St Michel, and Avranches and the Normandy Landing beaches.