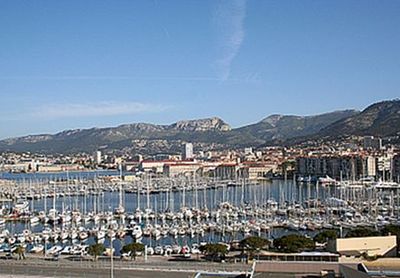 Compare & Save on car rental in Toulon

Toulon is a major city on the coast in Provence in the south of France, with a large military base. It seems to have served this role since Roman times, given its location and the large natural harbour which protects shipping from storms and from enemy attacks. It has served as the base for the French Mediterranean Fleet for centuries, evidenced by the great Tour Royale built by the French King Francois I at the mouth of the harbour in the 16th century. At the outbreak of World War II the naval ships sheltering in the harbour were all scuttled so that they could not be used by the enemy. Much of the town around the port was destroyed by Allied bombing towards the end of the war, and the town has over the years been rebuilt, with a new university opening in 1979. It was also became once again the administrative centre of the Var. Toulon is a city that is often overlooked by visitors to the South of France, but with its many museums, beautiful 19th century avenues, and sandy beaches created by the city authorities in the 1970s, it makes an interesting base from which to explore Provence and the coast. Plan car rental before your visit so that you can get around.

Things to Do in Toulon

There are four separate areas to the city, all worth exploring on foot. The old town, with its narrow cobbled streets and numerous little squares, lies just behind the harbour, and is largely pedestrianized. It is known for its many beautiful fountains, and for the 11th century Saint Marie de la Seds Cathedral. The area is a lively and interesting one, with the Provençal market taking place every morning, and many small craft and souvenir shops for the visitor to browse. The upper town was built in the 19th century, and if the architecture and wide avenues look familiar, that’s because the project was overseen by Baron Haussman, who went on to direct the rebuilding of central Paris.

Musée de la Tour Royale, one of the original defences of the harbour, now a naval museum

Télèpherique du Mont Faron, a cable car to the top of Mont Faron with fabulous views over the city

The Place de la Liberté is in the grand style, with its fountain and the Hotel de Ville, and the nearby Toulon Opera House, worth visiting for its extraordinary painted ceilings. Visitors can spend many hours in the Toulon Harbour district, walking along the promenade watching the arrival and departure of naval shipping. Le Mourillon is an old fishing village near the entrance to the harbour, nowadays popular for the beaches created along the seafront, and the excellent Museum of Asian Art is based here. Top Three Attractions Musée de la Tour Royale, one of the original defences of the harbour, now a naval museum Télèpherique du Mont Faron, a cable car to the top of Mont Faron with fabulous views over the city Toulon Opera House

The two nearest international airports are Marseille and Nice, both about 1 ½ hours drive from Toulon. You can arrange car rental in Toulon or choose to collect your rental car from the airport of your arrival – in either case, book the best deals through GoCarRental.com. Using the city as a base, if you have a car you can explore the glorious coastline of Provence, following the A50, including the picturesque villages of Cassis Le Bandol and Le Lavandou. Take the A57 and the D554 for a trip into the Alpes Maritimes and enjoy glorious views and over the coast and lavender fields. Remember that almost all French autoroutes are tolled, so be prepared with change.