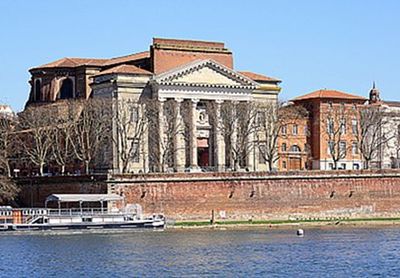 Compare & Save on car rental in Toulouse

Toulouse is the centre of France’s aerospace industry, with Airbus based here, the Galileo global satellite navigation system, and the aerospace equivalent of Silicon Valley – Aerospace valley. Toulouse is known as “la Ville Rose” for the soft pink brick that many of the historic buildings are constructed with, and the high student population makes it one of the most lively and alternative cities in France. Located on the Garonne river, in the department of Garonne in southwest France, it is the capital of the midi-Pyrenees region. It can claim two UNESCO World Heritage sites – the Canal du Midi, and the Basilica of St. Sernin, one of the ancient sites of pilgrimage on the route to Santiago de Compostela. The original town was a Celtic settlement, later governed by the Romans. It suffered a series of barbarian attacks after the fall of the Roman Empire, and went through a further turbulent period in medieval times, with the religious wars between the heretical Cathars and the Catholic Church and Toulouse became an important focus for the Inquisition. In the 20th century the city developed as a thriving industrial and manufacturing centre, attracting numbers of immigrants to work in the new industries. During the Second World War the city was a centre of the Resistance Movement.

Things to Do in Toulouse

The 120 mile long Canal du Midi was originally constructed between Toulouse and Sete on the Mediterranean to facilitate trade and exports, but the canal was later extended to link the Mediterranean and the Atlantic at the Gironde Estuary beyond Bordeaux. The Canal runs through Toulouse, and there are scenic walks along its banks, as well as the opportunity to hire a boat and cruise the canal, visiting some of the historic locks. Toulouse was the home of Antoine de Saint-Exupery, who wrote “Le Petit Prince”, and there is an exhibition devoted to his life and works at the Hotel du Grand-Balcon.

The Basilica of St. Sernin, was first constructed in the 4th Century to house the body of the saint, the first bishop of Toulouse. The current church was built in the 11th and 12th centuries, and is notable for its five-tiered bell tower and the beauty of the Romanesque statues. The Cité de l’Espace provides a great day out for the family, with interactive displays for the kids, and fascinating views of the night sky and space-walking on giant screens for the adults. Car rental will give you the benefit of being able to visit attractions like the African Safari at Plaisance du Touch which has all the mammals and reptiles that you would expect – lions, crocodiles, rhinoceros, camels and tapirs amongst them.

Whether you arrive on the high-speed rail link or fly to Toulouse –Blagnac airport, be sure to arrange car rental in Toulouse through GoCarRental.com before you travel. We will guide you through the best prices and the car of your choice. The city has connections with two auto routes, the A64 and the A62, which link in to the network of routes running east and west, and provide easy access to the towns and countryside surrounding Toulouse. From Toulouse, you can take a day trip by car to the foothills of the Pyrenees or explore the limestone plateaux of the Quercy Natural Park north of the city.