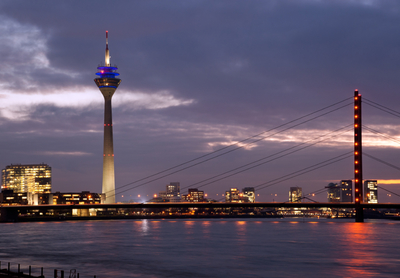 Compare & Save on car rental in Dusseldorf

Dusseldorf is situated on the Rhine, in the thriving commercial and industrial region of the Rhine-Ruhr. The city was the capital of the Duchy of Berg for many centuries, before suffering major damage and decline during the Napoleonic Wars. In the mid 19thcentury Dusseldorf became part of the Kingdom of Prussia and flourished as the centre of industry in the area. In the 20th century the centre of the city was almost entirely destroyed by Allied bombing towards the end of World War II, but over many years the historic heart has been restored, and is now one of the major attractions of the city. Dusseldorf is famous for its Carneval, festivals and fashion and trade fairs, and the major shopping boulevards reflect the glamour that the shows bring with them. It is also a centre for Germany’s IT and telecommunications industries, as well as hosting many media and advertising companies.

Things to Do in Dusseldorf

A major attraction for visitors to the city is the Altstadt, or Old Town, which at night turns into the “longest bar in the world”, with over 270 bars and brewing houses. Famous for the Altbier brewed in the Old City, tourists are wise to remember that if they are sitting in a bar with an empty beer glass, local convention is that it is filled without asking! During the day the Old Town is a wonderful shopping centre, and an attractive quarter to explore, with its many old gas lamps and narrow streets. The Burgplatz, next to the River Rhine, is on the edge of the Old Town, and the coffee shop at the top of the castle tower in the square offers stunning views over the city and the river.

Walking the promenade which stretches for over 10 miles along the right bank of the Rhine is a great way to spend a few hours, and there are numerous boat excursions offered along this stretch of the river. The Konigsallee is often described as one of the most famous shopping streets in Germany, with its range of designer and luxury shops, and the landscaped canal running up the centre. The city is also home to some outstanding museums, amongst them the Neanderthal Museum, which is close to the site of the discovery of Neanderthal Man; and the K20 Museum, with many major works of art from the last century. Most visitors will want to arrange car rental to explore the surrounding region as well as for the ease of getting around the city itself.

For tourists arriving by air and collecting their car rental at the airport, the route into the centre of Dusseldorf is an easy drive of just over 7 miles, taking the A44 and then from exit 30 following the banks of the Rhine on Danzigerstrasse and Kennedydamm to the centre of the city. Like many German Cities, the centre is an “environment zone”, and cars are required to display a sticker declaring the car’s pollution category. Take advantage of having booked a car through GoCarRental.com to explore the nearby cities of Cologne, Dortmund and Eindhoven in the Netherlands during your stay.