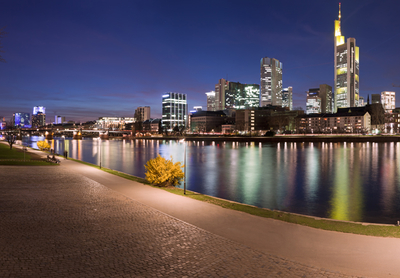 Compare & Save on car rental in Frankfurt

Frankfurt is a thriving city on the River Main in southwest Germany, with a population of over 2 million and boasting one of the world’s leading financial centres. Given its position in the centre of Germany the city is also a transport hub, with Frankfurt Airport being one of the world’s busiest airports. The city’s prosperity is symbolised by the towering skyscrapers at its centre, giving it skyline which is unique in Germany. The history of Frankfort dates back to Roman times and before; the Romans established an important base in the area, and the name of the city originates from the Germanic tribe of the Franks which made the settlement their home. The city was already establishing itself as an important European centre of finance in the 16th century, and in the 19th century it was the seat of the first democratically elected but short-lived German parliament. The historic centre of the city was almost completely destroyed by Allied bombing in the Second World War, and unlike some other German cities, there was no attempt to restore the medieval buildings – the new city centre was a tribute to modern architecture. The position of the city makes it an ideal base for exploring southern Germany, with the historic city of Heidelberg to the south and Cologne to the north-east among many nearby attractions. Car rental is a must for the visitor to Frankfurt and the best deals are available online with GoCarRental.com. If you’re flying into Frankfurt the airport is the ideal collection point for your hire car.

Things to Do in Frankfurt

For a combination of fine dining and spectacular views, the 200 meter Main Tower in the centre of the city offers both. At ground level, the city visitor can walk the banks of the River Main and some of the best museums in the city are to be found in this quarter. The Staedel Museum houses one of Germany’s finest art collections, from the 16th century to the present day. For film buffs, the German Film Museum provides a feast of film clips and memorabilia, and one of the most unusual musuems in the city is the Dialog Museum, which introduces the visitor to what it is like to be blind.

The Roemerberg Square is the site of come of Frankfurt’s few restored medieval buildings, with the old city hall and lots of little bars, craft stalls and coffee shops. The house where Goethe, the author of “Faust”, lived in his early years, has been fully restored and is furnished with many of his family’s original belongings. For family trips, Frankfurt Zoo, one of the largest in Europe, is a major attraction.

Frankfurt Airport is just a 20 minute drive from the centre of Frankfurt, with the junctions of the A3 and A5 autobahns being close to the airport. This interchange gets very busy in the rush hour, so is best avoided if possible. Parking near the tourist hotspots and in the city centre can be difficult to find and expensive – locals recommend using a “Parkhaus”, or parking garage, and then exploring on foot. It’s worth remembering that traffic regulations are rigorously enforced in Germany, and speed traps are frequent on the major road and autobahns. Ensuring that your car rental is equipped with satnav will make it easy to find your way around the city, and there is an excellent system of autobahns which encircle Frankfurt and lead in every direction.