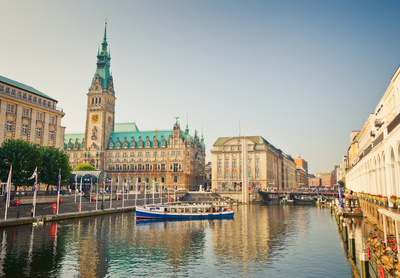 Compare & Save on car rental in Hamburg

Hamburg has a number of claims to fame, including being Germany’s busiest port, and the country’s “gateway to the world”. Located on the River Elbe, about 100 kms from the North Sea, Hamburg is Germany’s second largest city and has a proud history as a city state and a member of the Hanseatic League, the forerunner of the European Union, a medieval trading association linking cities across Northern Europe. In modern times Hamburg has become the centre of Germany’s media industry and an important hub of the European aerospace industry. The city suffered a devastating firestorm under Allied bombing towards the end of the Second World War, which destroyed many quarters and killed over 42,000 people. The prosperity of the port and the city have returned in subsequent years, and the reunification of Germany provided a boost to Hamburg’s economy. It shares the distinction with Liverpool of having launched the career of a young pop group called the Beatles.

Things to Do in Hamburg

Hamburg is a wonderful city to explore in its own right, and a great base from which to explore nearby Denmark and the great cities of Germany – Berlin is just over 2 hour’s drive away, and both Bremen and Hanover are within an 1 ½ hour’s drive. Booking car rental for your trip to Hamburg is easy through GoCarRental.com, where you can also locate the best value deals and the most suitable vehicle for you. Within the city itself, the Alster Lakes are a must to visit, with the starting point for walks around the shores in the centre of the city. Hamburg Town Hall (Rathaus) is an architectural gem, and houses a market on some days, with visitors being offered guided tours of the historic interior.

Hamburger Künsthalle is one of the largest and most important art museums in the country, housing seven centuries of art history, the exterior being a mix of 19th century architecture and modernist design. The International Maritime Museum pays tribute to Hamburg’s position as one of the world’s major ports, and tells the history of 3,000 years of maritime history. One of the great landmarks of the city is St Michaelis Church, with its 132 metre tower, and historic interior. Treppenviertel Blankenese is a little village on the outskirts of Hamburg which will challenge the walker, with its steep and cobbled alleyways, but the views over the city and the atmosphere of this historic area is worth the effort.

If you are collecting your car rental from Hamburg Airport, the drive into the city is a short 9 miles, and you are strongly recommended to make sure that your vehicle is fitted with a satnav system, as getting around the city can be confusing until you’ve found your bearings. The Saalandstrasse will bring you from the airport into the centre of Hamburg, and there is a ring road (the A4, 5 and 75) which encircles the city. Parking in the city centre costs about €12 for 24 hours and is a little easier to find than in some other German cities. You should take the opportunity at least once to drive through the “Elbtunnel”, an amazing feat of engineering which carries the A7 autobahn below the River Elbe.