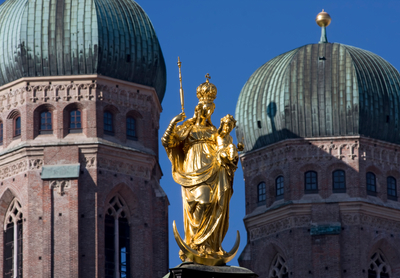 Compare & Save on car rental in Munich

Munich is the third largest city in Germany, renowned for its beer festivals and meticulously restored historic buildings in the city centre. It’s the capital of Bavaria, based in the south of the region, with the river Isar running through the city. Home to numerous museums that many argue outrank even those of Berlin, it has the reputation of being also the city of “high tech and lederhosen”. Over the centuries the city was the prosperous centre of the Kingdom of Bavaria and one of its most famous monarchs was the 19th century “Mad King Ludwig”, who was a patron of Wagner, built several fabulous castles, and was eventually deposed and died in mysterious circumstances. Badly damaged by Allied bombing, the historic centre was carefully restored, following a pre-war grid plan. Munich is now one of the most important business and commercial centres in Germany, and Europe’s largest publishing city. For more than a brief city break a car is essential to explore the city surrounds and the nearby lakes and mountains – arranging car rental through GoCarRental.com will provide the best value deals and flexible arrangements for the collection of your rental car.

Things to Do in Munich

Marienplatz, the largest public square in the city, is a good place for any visitor to start their exploration of the city. The Gothic Revival New City Hall which dominates one end of the square has a clock tower with a Glockenspiel with jousting knights that emerge every day at 11:00 am, midday and 5:00 pm. The Old Town Hall and the Grand Hall are equally impressive examples of municipal architecture. The city has numerous museums, and for lovers of engineering and technology the BMW Museum and the Deutsches Museum, with its full-scale models of aerospace vehicles, are likely to be a major draw.

Marienplatz and the New City Hall

The National Bavarian Museum houses an important collection of medieval artefacts, from armour to domestic pottery, while the new Museum Brandhorst has an impressive array of modern and contemporary art. Not to be missed are some of the magnificent palaces and castles in and around the city – the Schloss Nymphenburg, the summer residence of the Bavarian kings, is one of the most impressive. The 13th century Residenz in the centre of the city now houses concert halls and an exhibition of the royal regalia of Bavaria.

City residents usually advise visitors to explore the city centre on foot or to use public transport – inner city traffic is often very heavy, especially at rush hour, and parking in the central districts is almost impossible. Many areas in the centre of the city are also pedestrianized. But a car is a must for getting out of the city, and for visiting some of the visitor attractions on the outskirts. With GoCarRental.com you can arrange to pick up your car rental at the airport or from a rental point in the city. There are three ring roads, the A99, and Mittlerer Ring expressway, and the Altstadring, provide easy navigation around the edge of the city. As always when driving in Germany, familiarise yourself with the driving rules and regulations – in Munich, for instance, you will need to display an eco-sticker to be allowed to drive in most areas of the city. There are also coloured zones in the city regulating how long you may park, and on which days.