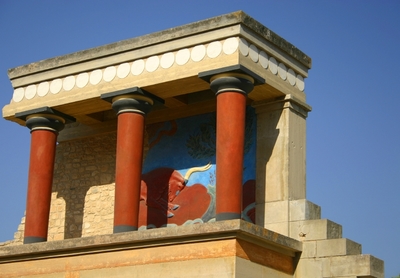 Compare & Save on car rental in Heraklion

Heraklion is the capital of the Greek island of Crete, and the fifth largest city in Greece. The main airport is on the edge of the city, so for convenience, and as a great place to stay while exploring Crete, Heraklion is popular with many visitors. The Saracens who were expelled from Andalusia in the 9th century founded the Emirate of Crete, and built a town on the present site, which was later expanded during the Byzantine period. The city has had a number of names through history, reflecting the current rulers of the island - Arab, Byzantine, Venetian and Ottoman. The modern name derives from the Roman city of Heracleum which was supposedly built nearby, and was given to the city in the 19th century. The modern city is a thriving port and ferry dock, linking Crete with the mainland, and with many other islands. With all that Crete has to offer in archaeological sites and tourist-trap beaches, a car is a must for exploring outside the city. Car rental is easily arranged and rental vehicles can be collected from the airport or from the city centre.

Things to Do in Heraklion

Crete and the area around Heraklion are steeped in history, with the Minoans who inhabited the island 2,000 years ago, founding the earliest recorded European civilisation. To learn more of the history of Crete a good place to start is the huge Archaeological Museum, a converted power station, with collections and exhibitions that span several thousand years of history. From there, a visit to the Minoan Palace of Knossos, just outside Heraklion, and one of the most important archaeological sites in the world, is a must. The interior of the Cathedral of St Minas is as impressive as the exterior, with stained glass windows and painted ceilings.

Views from the Venetian city walls and the tomb of the Greek writer Nikos Kazantzakis warrant the steep climb to the spot high above the city, with the ancient fortifications providing a backdrop. The Castello del Molo (Koules), the Venetian castle situated above the harbour, is currently being restored, but the walk out to the end of the pier, especially at night, is unforgettable. For beach enthusiasts, the Ammoudara Beach in Heraklion is a gorgeous stretch of golden sand with excellent and safe swimming, and all the facilities that you need to eat and drink at the edge of the beach with a choice of attractive tavern. Top Three Attractions Archaeological Museum Palace of Knossos Venetian City Walls and tomb of Nikos Kazantzakis

Use GoCarRental.com to plan your car rental in Heraklion ahead of your visit – that way you get the best deals available. As with many of the Greek islands, the main roads follow the line of the coast, and can be narrow and winding. Places to visit during your stay in Heraklion include Rogdia, with its panoramic views, and just a 30 minute drive from the city. Achlada, on route 90, has very pretty restored houses and wonderful views over the Agia Pelagia Peninsula.