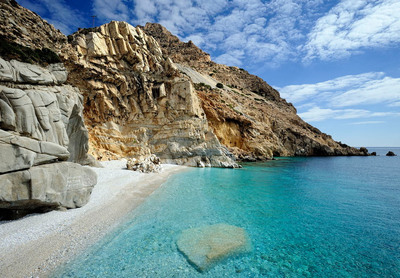 Compare & Save on car rental in Lesvos

Lesvos is a Greek Island in the north-eastern Aegean, separated from the Turkish coast by the narrow Mytilini Strait. The capital of the island is Mytilene or Mytilini, and the island itself sometimes goes under that name, to add to the confusion! The island was under Byzantine and then Genoese rule during the Middle Ages, and then conquered by the Ottomans, who governed the island until it became part of the Kingdom of Greece in 1912. Recent excavations have revealed a history of occupation of Lesvos dating back to the Paleolithic period, and there are a number of Greek and Roman remains. The Greek classical poet Sappho was born on the island and became famous for the series of love poems that she wrote to other women. The lyre of Orpheus is supposed to have found its way to Lesvos after his death, and the Greek philosophers Aristotle and Epicurus both lived on the island for a while. Modern day Lesvos earns most of its income from tourism, and the international airport has helped to encourage more visitors.

Things to Do in Lesvos

The main town, Mytilene, doesn’t have a great number of attractions, so a car really is necessary for anyone wanting to tour the island and visit the classical sites, mountains and beaches. To arrange car rental for your arrival in Lesvos, use GoCarRental.com to locate the best deals – a 4x4 is a wise choice so that you are not limited to tarmac roads when exploring the island. In Mytilene itself, do take the time to visit the castle, an enormous and impressive 6th century fortress overlooking the town and the harbour. Across the island is the equally dramatic castle of Molivos, and you can park your car to walk up through the cobbled streets of the old village to the castle on its peak of rock.

A ‘must see’ is the Petrified Forest, a day trip from Mytilene, but worth the miles. Being surrounded by a forest of 20 million year old fossilised trees is an experience few are likely to forget. Continue on to the beach at the fishing village of Sigri. An unusual but interesting museum is the Museum of Industrial Olive Oil Production in Agia Paraskevi, olive oil having been the major wealth generator for the island through the centuries. Skala Kollonis beach in Kolloni Bay is recommended for its gentle shelving sand and nearby tavernas and restaurants. If you are driving from Mytilene to Molivos, take a short detour to view the impressive remains of the Roman aqueduct en route.

The roads on Lesvos are generally in good condition, and remarkably free of traffic, so driving on the island can be a delight. On arrival, take the coast road for the short drive from the airport to Mytilene, for the views over the Straits to Turkey. Experienced visitors warn that roads tend to narrow sharply when they go through villages and towns, and also recommend that you hire a 4x4 if you want to explore off the major routes. Both coast and mountain roads are winding with hairpin bends, and demand care and concentration from the driver, as the drops can be steep!