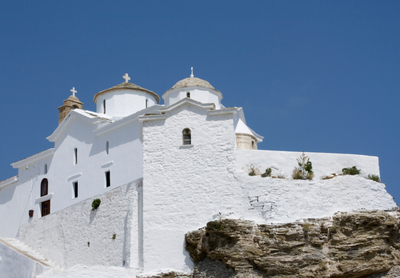 Compare & Save on car rental in Skiathos

Skiathos is the Greek Island of everyone’s dreams – set in the blue waters of the Aegean, with over 60 beaches around the coastline, some remote and almost deserted, with monasteries set high on rocky crags, and deeply wooded hidden valleys. The island lies on a northwestern to southeastern direction in the Aegean, and is surrounded by several much smaller rocky islets, some of which are visitable by boat. The main town is Skiathos, sited towards the northeastern end of the island, next to a lagoon. The airport that serves the island is just 1 ½ miles away from the town. The island has played a part in the turbulent history of Greece, providing a refuge for the Persian fleet during the Persian Wars, and in the 19th century a hide-out for independence fighters. In more recent times Skiathos has become a popular vacation destination, helped by the filming of “Mama Mia!” on the island.

Things to Do on Skiathos

A car is essential if you want to really enjoy your stay on the island, and explore the more remote bays and beaches. There are a number of choices of car rental companies on Skiathos, and you can find the best deals right here through GoCarRental.com. For beach lovers, there are any number of beaches to choose from – if you want all the facilities and a taverna close by, then Mandraki Elias beach is one of the most highly recommended, with Koukounaris Beach in Skiathos Town a close second. Just minutes away from Koukounaris is the Hidden Beach, a haven for lovers of peace and quiet. Il Kastro is the site of the ancient capital of the island, with ruins looking over secluded beaches and extraordinary views.

For lovers of watersports, Lalaria Beach offers excellent windsurfing, and picturesque rock formations to explore. A must on any visitors list is Christos sto Kastro which was the cathedral of the ancient city, and the interior is exquisite, with its wooden curved roof, gilded icons and wall paintings. The Evangelistria Monastery, built in the 18th century, is both a working monastery and a museum, and houses many ancient manuscripts and valuable relics. For a day trip, take one of the excursion boats from Skiathos town to the little island of Tsougria, which offers wonderful snorkelling from its beaches. Top Three Attractions Koukounaris Beach Christos sto Kastro Evangelistria Monastery

There is just one paved road around the Skiathos Town side of the island, but the island is criss-crossed with dirt tracks, so when you arrange car rental you are strongly recommended to book a 4x4 vehicle. That way you have total freedom to explore out-of-the-way beaches, and the mountains with their glorious views over the Aegean. Some of the dirt tracks can get steep, so drive with care, and watch out for vehicles coming in the other direction.