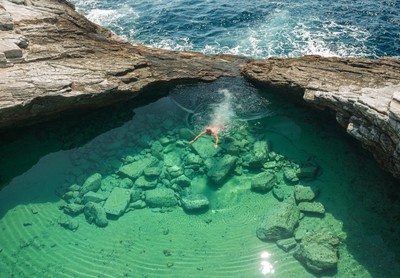 Compare & Save on car rental in Thassos

Thassos is the northernmost Greek island in the Aegean Sea, close to the coast of Thrace on the mainland. The island has been settled since pre-historic times and was colonised by the Phoenicians who discovered and mined gold on Thassos. The island was known for its prosperity for many centuries, with Thasians trading in gold, their famed wine, nuts and the treasured marble quarried from Thassos. Like many of the Greek islands, Thassos subsequently suffered a number of different rulers – the Athenians, Romans, and Ottoman Turks, in whose hands it remained until the Balkans War of 1912. The island now has a thriving tourist industry, and whilst marble is still quarried, the gold mines have long been emptied of their precious metal. The island doesn’t have its own airport but is served by two international airports, at Kavala and Thessaloniki. There are frequent ferries from the port of Keramoti, close to both airports, to Thassos. Having to be reliant on bus timetables can be tedious, and visitors are advised to arrange car rental from one of the airports on their arrival, although there are also rental companies on Thassos itself. Explore all the options with GoCarRental.com.

Things To Do in Thassos

The beaches on Thassos are glorious, with a choice of peaceful and secluded, or more lively. Skala Prinos beach is surrounded by pine forest, and stretches for several miles, so you are unlikely to find it over-crowded. Skala Potamia is the beach to go to if you want to enjoy swimming and sunbathing during the day and party in the evening – the beach is surrounded by bars, restaurants and nightclubs. Saint Pantaleimon Monastery is situated on one of the highest points of the island and has some fascinating and historic icons on display. The 4th century BC structures of the ancient Agora of Limenas were only discovered in the 1940s, and lie in the centre of Thassos town. The Agora was the ancient heart of the city of Thassos, with buildings devoted to the political, commercial and religious life of the city.

The 3rd century marble amphitheatre dedicated to Dionysis looks over the town of Thassos and the sea beyond, and is now host to many concerts and plays during the summer. For a different kind of experience, take one of the guided tours to the caves of Drakotrypa (“Dragon’s Cave”) or Rachoni to view their colourful stalagtites and stalagmites. To learn more of the history of the area, a visit to the most important archaeological museum in the region will reward your interest – the museum in Thassos has a fascinating collection of ancient statues, ceramics, coins and grave inscriptions. Top Three Attractions Skala Potamia beach Saint Pantaleimon Monastery Theater of Dionysis

The Egnatia Highway runs from Thessaloniki International Airport to the ferry port for your crossing to Thassos. On the island itself, the one main paved road encircles the island and a single road crosses from north to south, but there are numerous dirt tracks, and if you have booked a 4x4 for your car rental you can enjoy all the freedom of going ‘off-piste’.