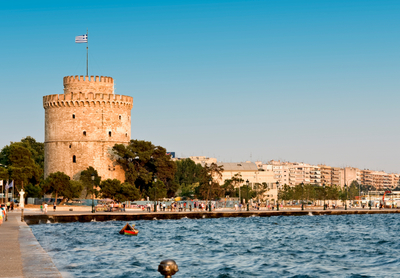 Compare & Save on car rental in Thessaloniki

Thessaloniki is the second largest city in Greece, and a thriving port and ferry destination. The city is the capital of the Greek Macedonian region, and is the centre of many major cultural events, including an annual film festival and it has been chosen as the European Youth Capital in 2014. It’s a popular tourist destination, both as a setting-off point to the Greek islands, and as a great partying place for younger holidaymakers. Under Roman occupation it became an important strategic gateway to the Balkans and beyond, and like many cities in the area, subsequently came under the rule of Byzantium and then the Venetians in the 15th century. It was, for several centuries, part of an expanded Ottoman empire, before being ceded to Greece after the First World War. Occupied by the Germans during World War II, its turbulent history was finally forgotten in the ensuing peace, with major infrastructure building projects, and the development of a thriving business and commercial sector. Fortunately many of the historic buildings from the city’s past have survived invasions and earthquakes, and the Greek Agora and Roman Forum have been classified as a UNESCO World Heritage site.

Things to Do in Thessaloniki

Thessaloniki is the perfect place to stay for visitors planning to take day trips to the nearest islands of Skiathos and Skopelos, tour northern Greece, explore the peninsulas and bay of Toroneos Kolpos nearby, and take a boat trip to Mount Athos. The city itself has numerous attractions, and not to be missed are the Museum of Byzantine Culture, with its extraordinary collection of icons, mosaics, and early Christian art.

The church of Ayios Demetrios is a spectacular building, the interior adorned with gilded icons, and a crypt displaying ancient ruins believed to include the prison of Ayios Demetrios. The White Tower, with its views over the city and the sea, was originally built during the Byzantine period, and today contains exhibitions showing the history of the city. Booking car rental before arrival in Thessaloniki with GoCarRental.com will give you the freedom to explore the surrounding region, with its dramatic mountains and coastline. A day trip to Kavala old city with its aqueduct and ancient castle, as well as the Art Deco tobacco warehouses, will repay the drive, as will the scenery along the coast. The Pieria region to the southwest of the city has quiet sandy beaches, picturesque fishing villages, and the mighty Mount Olympus, the legendary home of the Greek gods.

If you are collecting your car rental from Thessaloniki Airport, the drive is an easy 12 miles on the Thessalonikis Neon to the city centre. The city itself is easy to navigate, with an outer ring road and the major boulevards running east to west. Parking appears to be lax, but don’t risk getting a ticket: there should be plenty of legal parking places in the city. The major roads in the area are excellent: as always, if you are exploring in remoter regions, be prepared for single-track roads, slow-moving vehicles and keep your speed down on steep mountain roads. Pull over and stop to admire the view to avoid getting distracted.