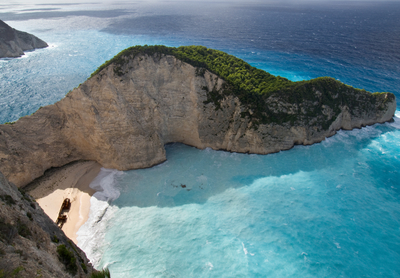 Compare & Save on car rental in Zakynthos

Zakynthos is the third largest Ionian island, located twenty miles off the west coast of Greece. The island is mentioned in Homer’s Odyssey, and was conquered by the famous Ulysses before becoming one of the earliest self-ruling democracies for 650 years. It later fell under Byzantine, Venetian and then French rule in the 18th century. Captured from the French by the British, the island was eventually ceded to the Greek state in 1864. Zakynthos was notable for defying Nazi orders to round up the Jews living there during the Second World War, and every one survived, hidden in the mountains and rural villages. A major earthquake in 1953 destroyed almost all the buildings on the island, and the rebuilding programme included a major upgrade of the island’s roads and the opening of the airport in 1960. The northern and eastern shores of the island have long sandy beaches and are the busiest tourist areas, with the rugged cliffs and caves of the southeast coast offering more peaceful and relaxed resorts. To fully enjoy all that the island has to offer a car is essential, and many visitors hire a 4x4 as minor roads and mountain tracks are unsurfaced. Book the best deals through GoCarRental.com before your vacation to find the vehicle of your choice.

Things to Do in Zakynthos

If partying is your thing, then Laganas is definitely the place to go, with its numerous bars, restaurants and all-night clubbing scene. The sandy beach is five miles long, and in the height of summer tends to get crowded, but the swimming and water sports are excellent. For a peaceful beach scene, the picturesque Porto Limnionas Beach is tucked into a little rocky cove and the deep water is great for snorkelling. The island has numerous sea caves, and the best way to visit is to hire a boat or take one of the tours offered – the most spectacular are the ‘Blue Caves’ in Cape Skinari at the northern end of the island. Boat trips are offered from Agios Nikolaos Port.

Zakynthos Town, the capital of the island, is a lovely place to wander around, and Agios Dionisios church is one of the unmissable sights, with beautiful murals and mosaics and its picturesque bell tower. One of the most famous landmarks of the island is Navagio or “Shipwreck” beach, accessible only by boat, with the wreck of the MV Panagiotis still visible on the sand. Above the beach is a small monastery and an observation platform.

You can collect your car rental on arrival at Zakynthos airport, which is close to Laganas. The main island road runs from Zakynthos to circle around Volimes in the north west. Driving on Zakynthos outside the main holidy period of July and August is relaxed and the roads are relatively quiet, but watch out for Greek drivers not always observing road markings! Areas of Zakynthos Town are pedestrianized in the evenings, and parking is on one side of the road one month and the other the next – just observe where everyone else has parked and you can’t go wrong! Some of the mountain roads and tracks are narrow and winding, so you need to take extra care if you are exploring the interior of the island.