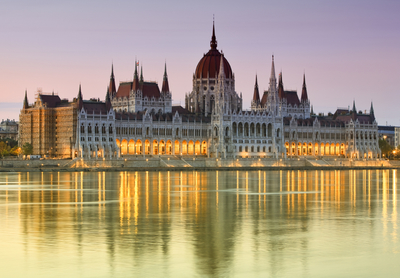 Compare & Save on car rental in Hungary

Hungary is in the top 20 of the world’s most popular tourist destinations, and with the beautiful capital city of Budapest, many traditional rural villages, the great River Danube, forests and lakes, it offers endless attractions to the visitor. At the heart of “Mittel-Europe”, sharing borders with seven other European countries, its history has always been vitally connected with events to the west and to the east. After the fall of the Roman Empire the tribes who invaded Europe from the eastern steppes included the Magyars, the people who formed the basis of the Hungarian nation. The golden age of Hungary in earlier times was under the rule of the Arpadian Kings, but in the 16th century the country was invaded by the Ottoman Turks and split between the Turks and the Austrians and a dual Austro-Hungarian Empire was formed at the end of the 19th century. The country was devastated by the invasion firstly of the Nazis in the Second World War and then of the Soviet Army. Hungary became a satellite state of the Soviet Republic until the fall of the Iron Curtain in 1989. Today the country is a successful democracy and a member of the European Union, with a thriving economy. The capital, Budapest, is in Central Hungary.

Things to Do in Hungary

Budapest is on UNESCO’s World Heritage list for its many historic buildings, the Buda Castle Quarter and the Banks of the Danube. In a city with so many delights, that provides the visitor with a guide on where to start. Eger, in Northern Hungary, is a historic town renowned for its natural thermal baths, castle and historic buildings, including a Turkish minaret. Lake Balaton – the largest freshwater lake in Europe – is surrounded by small traditional towns, many with spa baths, and by the Balaton Uplands National Park, ideal hiking country. Hungary is also the land of castles – there are more than 2,000 castles and mansions in the country, with some of the finest being the 126-room Esterhazy Palace in Fertod, where Haydn wrote the majority of his symphonies, the Karolyi Mansions at Fót, and the Biedermann Palace at Szentegát.

For a wonderfully relaxing break, the spa-complex of Hajdúszoboszló in Eastern Hungary offers an aqua-park, thermal baths, an aqua palace, and every kind of spa treatment. Pécs, the fifth largest city in Hungary, close to the Croatian Border, has a fascinating early Christian necropolis, the remains of a Roman Viaduct, a magnificent medieval cathedral founded by King Stephen I, and a 16th century mosque, now serving as a Catholic church. Hungary is an ideal country to explore by car, with many hidden gems of rural villages and small traditional towns, as well as the dramatic landscapes of the forests and mountains. Make sure that you find the best car rental deals ahead of your trip to Hungary by booking with GoCarRental.com

The major roads in Hungary are generally good, but expect that apart from motorways many will be two lane. The speed limit for motorways is 130 kph, and on other major routes 110 kph, but there will be much lower limits where roads are under repair or in rural villages. Be aware that there are very strict drink-driving laws and the best policy to adopt is not to drink at all if you expect to drive! You will need a vignette for expressways which your car rental company will tell you about when you collect your vehicle. The main highway network, being added to all the time, spreads outwards from Budapest, and links to all the main cities, as well as to the surrounding countries of Austria, Slovakia, Croatia, and Romania.