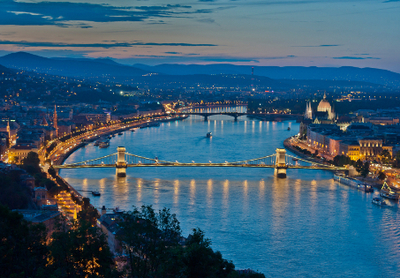 Compare & Save on car rental in Budapest

Budapest, the capital of Hungary, was originally settled by the Celts before becoming a Roman garrison town. Sacked by the Mongols in the 13th century, the rebuilding of the town created one of the most important centres of European Renaissance art and architecture. After the 150 year rule of the Ottoman Turks Hungary became part of the Austro-Hungarian Empire in the 17th century, which only fell with the end of the First World War. At the end of the Second World War Hungary was declared a Communist People’s Republic, and the tragic 1956 uprising against Communist rule took place in the centre of Budapest. With the fall of the Iron Curtain in 1989 the country’s democratic parliament was based in the capital, and the city has flourished with the rise of tourism, and the expansion of trade and commerce since Hungary joined the European Union. Budapest is literally a “city of two halves”, with Buda being on the hillier western side of the River Danube, and Pest (the livelier part of the modern city) built on the eastern plain across the Danube.

Things to Do in Budapest

Visitors to the city should use Castle Hill as their starting point, beautifully restored after being reduced to rubble at the end of the Second World War, and providing glorious views over the Danube. Castle Hill lies at the heart of the medieval city, with its narrow cobbled streets and Baroque and Renaissance squares. The Hospital in the Rock Museum is a fascinating glimpse into how the inhabitants of the city survived under siege during the last war. A funicular railway takes you to Buda Castle at the top of Castle Hill. Andrassy Avenue is a wide 19th century avenue and the up-market shopping centre of the city. Look for some of Budapest’s best restaurants and bars just off the Avenue.

The Banks and Bridges of the Danube

The Great Synagogue is at the centre of the Jewish quarter of the city, and is the second largest synagogue in the world. There’s an exhibition inside which describes the experience of the Jews in Hungary during the Holocaust, and tells the story of Raoul Wallenberg, the Swedish diplomat who helped to rescue so many. The Hungarian National Gallery houses works of art dating from the 10th century to the modern day, with a good collection of Chagalls. And no visit to the city is complete without walking along the banks of the Danube, and taking a boat trip on the river.

The centre of Budapest is always busy, with peak traffic occurring during rush hour. Given the rather eccentric traffic rules on where you can and cannot make left turns, the visitor might be wise to explore the centre of the city on foot or use public transport, and reserve their car rental for exploring the wider region. The city is divided into districts, and it helps to familiarise yourself with the numbers to find your way around. Budapest Airport is in District XVIII, a 12 mile drive from the inner city. Budapest makes a great base from which to explore Central Hungary; route 12 takes you north from the city along the banks of the river to the Danube National Park. The M7 leads to Lake Balaton, and to the east of the city the M3 brings you to the region of lakes, mountains and forests. Booking car rental online with GoCarRental.com for your visit to Budapest gives you a choice of collection points and allows you to plan for your tour of Central Hungary.