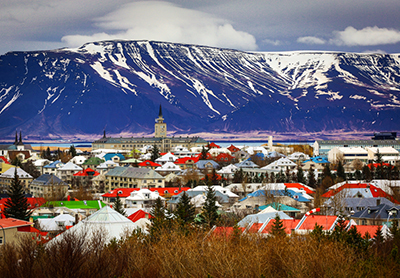 Compare prices and save money on your car rental in Reykjavik

Renting a car in Reykjavik brings unlimited possibilities. No other place in the world but Iceland deserves to be so thoroughly explored. It is a land of hidden treasures.. On GocarRental.com, you will have the possibility of reserving your car from home, saving precious time. Thanks to our comparison tool, you can identify which car is the cheapest and which is the best for you. Crucially, our search engine lists every car rental agency in Iceland. You may collect your car at the city center with Geyser or Budget; or at the airport, with Sixt, Europcar, and many more. You just need to remember your driving licence! p>

What to do in Reykjavik

Reykjavik is a modern, à la mode city in close contact with its ancient and fairy tale­like world. It comes as no surprise that the structure of the city is in tune with its surroundings. In Reykjavik there s an absence of skyscrapers and looming, huge buildings. Instead you’ll find wood­based architecture that usually functions with geo­thermal energy. Your tour can start from the oldest street of the capital, called Aðalstræti, which is also the point where the house numbering of the whole city begins. Popular tales claim that the legendary Viking king Ingólfur Arnarson founded the city on this street in the house at number 10, where you can find Island’s oldest house. Reykjavik has proved to be an important cultural centre in Europe. There are many charming places of great historical value. For instance, the Þjóðminjasafn, the National Museum, or churches curiously built like the Hallgrimskirkja, are considered a symbol of the city and of Iceland in general. This church is lavish and striking, with its enormous and magnificent 5275­pipes organ. However, do not miss its elevator, which will lift you all the way to the summit of the church’s tower, at 75 meters from ground­level, making it a perfect spot for viewing the city skyline. Afterwards, why not pop over to feedbread to the ducks of Tjörnin, a small lake that in spring and summer is known as “the biggest bread soup in the world” and in winter freezes over to become an enchanting ice rink. If you love shopping, finally, take a look at Laugavegur, the most crowded and illustrious shopping street in the country. While it is now a very packed place, in the past it was the path for washerwomen going to and returning from water sources.

One of the most interesting and diffused facilities in Iceland are pools and spa, all of them warmed by geothermal energy. Near Reykjavík there are several fine ones. With your rental car you can, for instance, easily reach Laugardalslaug, arguably Iceland’s biggest and nicest spa. Forty minutes away by car you’ll find the geothermal baths of the widely­known Blue Lagoon, a spa majestically surrounded by black, cold lava. If you are looking for some typical Icelandic natural landscape, visit Snaefellsnes, a peninsula that takes its name after an enormous volcano­glacier and boasts unique natural phenomena side­by­side with outstanding basalt columns and a beautiful coastline. Going on to the final end of the peninsula, you can walk in Iceland’s most recent national park and finally reach some beautiful fishing villages, in particular the stunningStykkishólmur.