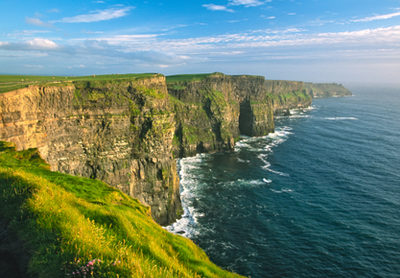 Compare & Save on car rental in Ireland

Ireland is an island in north-western Europe, located just off the west coast of Great Britain. Divided politically since 1920, most of the island is made up of Ireland, i.e. Republic of Ireland, as well as the far smaller Northern Ireland, which remains part of the UK. Celtic tribes first settled in Ireland the 4th century BC and its Celtic roots can still be felt in its language, culture, literature and architecture. A relatively poor country for much of the 20th century, Ireland began to boom in the mid-90s and early 2000s, and culturally, has given us some of the world\'s best known bands, performers, writers and artists - including U2, James Joyce, Van Morrison and Oscar Wilde. Known as the Emerald Isle, there is a wealth of natural beauty to be explored on the island, as well as important historic cities like Cork and Dublin.

Things to Do in Ireland

Whether you\'re looking for a city break or complete escape to a rural idyll, you can find it in Ireland. Car rental in Ireland is a great idea if you want to pack in as much as possible, and especially if you want to make the most of the golden beaches, forests and mountains of rural Ireland, which aren\'t so well served by public transport. One of the most traditional tourist highlights is a visit to Blarney Castle in County Cork, where you can \'kiss the Blarney Stoner\' and be rewarded with \'the gift of the gab\'.

A visit to the Medieval capital of Kilkenny

Exploring the beaches, cliffs and hills of the rural County Donegal

One of Ireland\'s biggest and most popular tourist attractions is the Cliffs of Moher, which tower over the Atlantic to an imposing 230 meters in height. For a city escape, head for the capital, Dublin, for its vibrancy, lively nightlife, abundance of museums, as well as the Irish Museum of Modern Art. Top Three Attractions Kissing the Blarney Stone A visit to the Medieval capital of Kilkenny Exploring the beaches, cliffs and hills of the rural County Donegal

Driving in Ireland can be done with relative ease, remembering that, like the UK, cars drive on the left here. The island is well served by motorways, of which some now have tolls typically charging in the region of a coupled of Euros. There are a wealth of scenic drives for you to explore, whether you head for the coast or the green forested inland. You\'ll find plenty of car rental options for your Ireland trip at all major ferry ports, airports and cities too. It\'s worth noting that most if not all road signs here are bilingual - in both English and Gaelic.