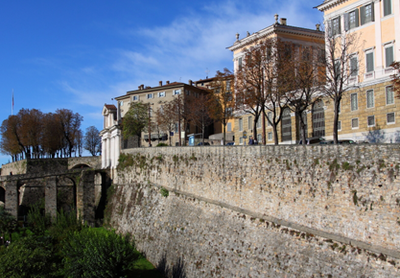 Compare & Save on car rental in Bergamo

Bergamo is about 40 km northeast of Milan, at the foot of the Italian Alps in the province of Lombardy. It was one of the Italian cities lucky enough to virtually escape bomb damage in the Second World War, and so the old town and 19th century streets survive almost intact. The city now has two centres, the old hilltop medieval town within its Venetian walls overlooking the lower modern city, and the Citta Bassa. The two towns are linked by a funicular railway and numerous footpaths for the fit visitor. The modern city is a thriving commercial and industrial town, with lively shopping centre, bars and restaurants. Given its proximity to the Alps it’s also a popular destination for skiers in the winter. Car rental in Bergamo can be arranged right here through GoCarRental.com either from one of the rental companies with collection points at the airport, or from a convenient pick-up point in the city itself.

Things to Do in Bergamo

Bergamo has endless treasures to discover for anyone interested in art and architecture, with the Venetian old town – La Citta Alta – to explore, with its winding cobbled streets, to the exquisite small Palazzos built in the 17th and 18th centuries. The Piazza Vecchia is the heart of the old town, and is an exquisite mix of medieval and Renaissance architecture. The 12th century Basilica of Santa Maria Maggiore is unmissable, and the composer Donizetti is buried here. The Opera House is dedicated to Donizetti, and has an impressive gilded and frescoed interior.

The Funicular which runs from La Citta Bassa to La Citta Alta provides glorious views during the short trip, and is a great way to spare the effort of arriving at the old town on foot. The Accademia Carrara holds one of the most important art collections in Italy, including works by Bernini and Canova. The trip in a glass-sided lift up the inside of the old bell-tower, the Campanone, is unmissable, ending with the view across the city from the top of the tower. The Via 20th Settembre and the Via Sant’Alessandro are the main pedestrianized shopping streets in the heart of the lower town. And on a second funicular route, the old hilltop village of San Vigilo with its castle overlooking the plain, is worth the trip.

Bergamo is not a large city, and the interesting areas are probably best explored on foot. The main shopping streets are pedestrianized. As a base from which to tour, so car rental is essential - the city offers the beauty of the Italian Alps and the plains of Lombardy, so the visitor will be spoilt for choice. The airport (Bergamo Orio al Serio International Airport) is a 6km drive from the centre of La Citta Bassa, taking the A4 and then the SS591 from the airport to Bergamo. The SP12 will take you out of the city and into the mountains, with many small villages and towns to explore; heading south, the Via Provinciale, the SS591, runs down the valley of the Fiume Serio towards Castelleone.