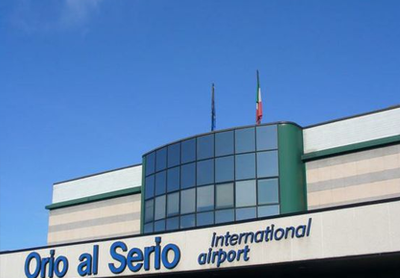 Compare & Save on car rental in Bergamo Airport

Orio al Serio International Airport is an airport that is geared towards low-cost airlines from across Europe and beyond. Providing a cheap and easy route into Italy, it is only a 5km drive from the pretty town of Bergamo. A small and wonderfully picturesque town nestled in the hoothills of the alps, it’s home to 120,000 people and a wealth of medieval architecture, narrow winding streets and beautiful piazzas to explore. Bergamo really offers up two two cities in one – the Citta Bassa, which is the busy and modern lower city, and the Citta Alta, which is the upper Old Town. The airport also provides a great base for tourists looking to drive to one of italy’s most popular tourist cities, Milan, which is just 45km away.

Things to Do in Bergamo Airport

Within the airport you’ll find a range of car rental options, as well as plenty of other useful services, including a currency exchange, banking services and a VIP lounge. Cafes, restaurants and shops within the airport concentrate on specialist local cuisine, wine, clothing and crafts rather than bigger international brands – which is great for those looking to take a true taste of Italy home with them. Bergamo itself is not a very big city, and most of its attractions can be seen on foot.


For most travellers, Bergamo is just the first stop on their journey through to nearby Milan, just a short drive away. For those looking to explore Bergamo before they set off to explore the rest of this beautiful Italian region, must-see sights include the Citta Alta (Old Town), Historical Museum of Bergamo located inside the Rocca, and the 19th century Donizetti Theatre, home to the annual Jazz Festival.

Orio al Serio International Airport is an easy 5km drive to and from Bergamo along the Autostrada A4. The Bergamo area being situated in the foothills of the Alps means that, besides the tourist draw of nearby Milan, there is also a handful of ski resorts to expore for a more active vacation. All are within a one-hour drive, with the Brembana Valley resorts of Foppolo, Carona and San Simone being the most popular. For a truly relaxing break the San Pellegrino Terme spa resort is just 25km from Bergamo, up in the mountains. And those visiting the area by car would do well to take advantage of the airport’s proximity to two of Italy’s most beautiful lakes – Como (62km) and Lake Garda (78km).