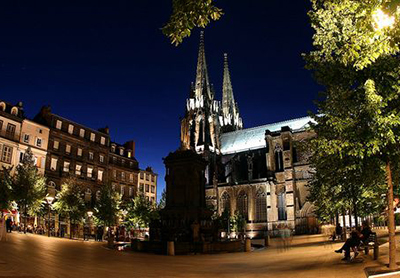 Hiring a car in Clermont-Ferrand is the best and least expensive way to explore this beautiful city and its surroundings rich in historical monuments. On our website GoCarRental.com, we can help you out and simplify your trip in this interesting town located in Puy de Dome in Auvergne, central France. King Louis XIII of France decided to found Clermont-Ferrand in 1630 by joining two existing cities called Clairmont and Montferrand. The former has a history that dates back to antiquity, while the latter is a twelfth-century city. Clermont-Ferrand is currently part of the “French Towns of Art and History” list, an acknowledgment of the city’s religious buildings built in dark volcanic stones. In Clermont-Ferrand you can visit the twelfth-century Romanesque Notre Dame du Port, named UNESCO World Heritage Site since 1998. His nave is adorned by many highly decorated stone columns. The Cordeliers-vieux chapel now is used as a precious exhibition venue adorned by outstanding pieces of stained glass. But do not forget the Notre-Dame-de-l’Assomption Cathedral with its two symbolic 108-meter-high towers. Not too far away from the Cathedral you can visit hotel Chazerat, a splendid eighteenth-century mansion built in Volvic stone whose monumental gate and courtyard are especially worth of attention. Afterwards, you can ramble through the many pedestrian streets in Clermont-Ferrand’s city center. The city center, very abundant in shops and boutiques, has is core in Victory Square, where bars and restaurant with terraces abound. Close-by, you can take a look at another important pedestrian-only area, namely Place de Jaude and its Municipal Opera, St Pierre des Minimes church, and department stores. This square is wonderful especially by night thanks to its savvy illumination system. In fact, on the dark basalt surface, 250 red and yellow diodes turn on and off in guise of lava movements. The mood is made even more alluring by fountains enlightened in hues of red and by an illumination structure on the buildings of the square.