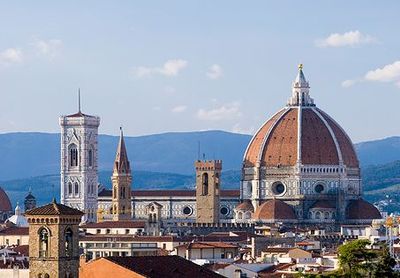 Compare & Save on car rental in Florence

Florence attracts millions of tourists every year, and is considered the birthplace of the Renaissance, the modern city is the most populous in Tuscany, and as well as the historic centre has a prosperous industrial and commercial area on the outskirts. The airport, named after the explorer Amerigo Vespucci, is a convenient 7 miles from the centre of the city, and there is an excellent road network connecting Florence to the other historic centres of Bologna, Lucca, Pisa, and Livorno on the coast. Florence was founded by the Romans and named for its siting between two rivers, but its most famous connection is with the Medici family in the 15th century. The most powerful family in Italy during the Renaissance, they dominated the Catholic Church, politics and the arts. It was their generous patronage that provided the city with many of the artistic and architectural treasures that have made it famous throughout the world.

Things to Do in Florence

Advice to visitors is to try and aim for a visit outside the summer peak of tourism; during autumn, winter and early spring you will be able to see buildings without the massed crowds in front of them and browse galleries at your leisure. While you don’t need a car for exploring the city itself, to tour the Tuscan countryside, and take advantage of Florence’s proximity to the glorious walled city of Lucca or to view the leaning tower of Pisa, a car is essential. Car rental in Florence or from the airport, and finding the most suitable vehicle and best deals can all be done right here through GoCarRental.com.

In the city, one of the unmissable attractions is the Uffizi Gallery, one of the world’s top art galleries, housing works by Botticelli, Leonardo da Vinci, Caravaggio and Rembrandt. Florence’s cathedral, the Duomo, with its magnificent Renaissance dome dominating the city centre, has an interior which is mercifully cool on the hottest summer days and boasts a superb mosaic floor. The Piazza della Signoria contains not only that symbol of political power the Palazzo Vecchia, and the statue of David (the original is in the Galleria del’Accademia), but also Cellini’s statue of Perseus. The Ponte Vecchio, with its buildings and jewellers shops, on one of the narrowest parts of the River Arno, is one of the best-known images of Florence.

Visitors are well advised not to drive into the centre of Florence, which is crowded with people and traffic, and has a number of pedestrianized areas, but to park in one of the car parks on the outskirts of the city. Florence repays being explored on foot. But if you are staying in the city or surrounding area then if you have arranged car rental take advantage of the excellent road network, and follow the A11 motorway to Pisa and Livorno, or the A1 south to Perugia and Rome.